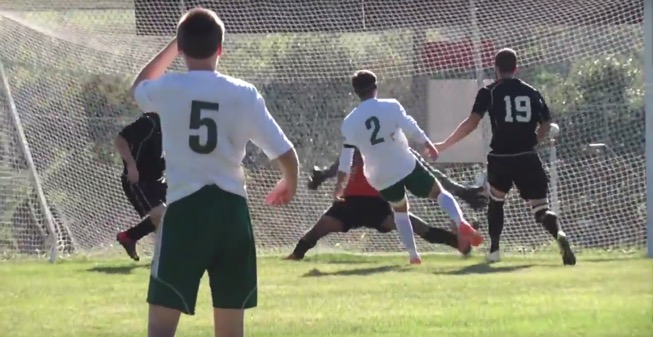 The Wellsboro Varsity Boys Soccer team won their sixth consecutive game with a 10-0 shutout against Towanda on Thursday, September 22.

Senior Josiah Hill tied a personal best with 5 goals in a single game, the last time was against South Williamsport last year. Hill now has a Wellsboro Boys Soccer school record of 72 goals, and is now 10 away from Alexis Getty's record of 82 career goals.

"I credit a lot of it to my teammates," Hill said. "They put me in the right position and get the ball where it needed to go and I just ended up being there to put it in."

Hill also feels like to team is more confident now than they were at the beginning of the year.

"We've built more confidence off each win and have gotten better and better as the games go on. I think winning and playing as well as we have have helped us a lot."

Hill scored less than 3 minutes into the game off a header by senior Jacob Singer. Hill made it 2-0 with 29:24 left on an assist by junior Gabe Leach before junior Tanner Runyan made it 3-0 Hornets with 21:37 remaining with Hill assisting. Hill then added goal 3 with 6:17 to go and his fourth with 1:29 remaining before the half on another assist by Leach to make it 5-0.

Hill tallied his fifth and final goal with 38:51 in the second half off an assist from junior Devin Webster to make the score 6-0 and put the game out of reach. Sophomore Brett Rudy scored his fifth goal (unassisted) of the season to push the score to 7-0, junior Nolan Lohr scored off an assist from sophomore Cam Tennis with 15:30 to make it 8-0, then Tennis scored back-to-back goals with 12:15 (Singer assist) and 10:45 remaining to make the score 10-0.

The Hornets took 25 shots on goal during the game to Towanda's 2, both saved by senior Casey Hoover, and had a 7-4 advantage in corner kicks. The shutout was Hoover's 4th of the season and 10th of his career.

Shaffer also credits his team in turing their season around after starting the season 0-3.

"The boys started to make the appropriate choices and really focused on being unselfish. We've changed some things tactically, but it was their decision to be a bit more unselfish and just pass the ball and let the results happen."

Wellsboro also won the JV game, 2-0, to improve to 8-1 on the year. Sophomores Tanner Button and Alan Hazelton scored the goals.

The Hornets are now 6-3 (5-2 NTL). The team will be back in action on Saturday, September 24 against Lakeland.