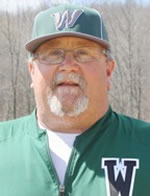 Coach Carr is in his ninth year as head coach of the Hornets softball team. Coach Carr is a 1982 graduate of Wellsboro Area High School, where he played baseball.

Outisde of coaching softball for Wellsboro, Coach Carr works at the Tyoga Country Club and is the president of Punisher Athletics. In additon to his Varisty coaching, Coach Carr has also coached Little League baseball and softball, and has worked in conjunction with current baseball head coach Philip Prough during their 2007 District IV Championship season.

Coach Carr currently resides in Wellsboro with his wife Cindy, and kids Garrett and Paige.