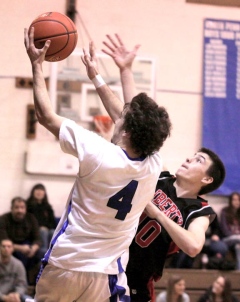 BLOSSBURG - The Warriors finished strong in the first and second halves to come away with a 54-41 win over Liberty girls' title in the North Penn Kiwanis Christmas Tournament Thursday.

The two teams were tied at 11 after the first quarter but an 18-7 advantage for the Warriors in the second gave them 29-18 lead at the half.

Liberty rallied in the third, out scoring Canton 11-6 despite leading scorer Brooke Scott-Knecht sitting out due to foul trouble.

The Warriors used a 19-12 advantage in the fourth to take home the trophy.

Kaitlin Meyer finished out the Canton scoring with seven points.

Scott-Knecht was Liberty's selection on the All-Tournament team. She had 16 points, 12 rebounds and two blocks.

Nicole Black and Crystal Dietrick added three points each while Brittany Bickhart had one. Black also dished out two assists.

BLOSSBURG - The Warriors held off the hosts Panthers in the consolation game of the girls' North Penn Kiwanis Christmas Tournament Thursday.

Williamson led 17-11 after the first quarter and continued to hold the lead through to the second half.

They extended the lead to 41-30 going in to the fourth quarter but North Penn rallied, cutting the deficit to three points at one point before falling.

Cheyenne Jones and Lori Horton had 13 points each to lead the Warriors. Horton added 10 rebounds, 7 steals and had five blocks while Jones scored eight boards.

Daugherty and Holdren were the two All-Tournament selections.

BLOSSBURG - Williamson jumped out to a 24-12 first quarter lead and held Canton at bay most of the game to take the boys' North Penn Kiwanis Christmas Tournament Thursday.

Vargeson was the Tournament MVP while Huyett also made the All-Tournament team. Larcom and Moore made it from Canton.

BLOSSBURG - The Panthers broke open a close game in the second quarter.

Liberty cut it to 16-10 at one point in the second quarter but North Penn got hot from the field finished the half up 37-15.

Jason DeHaven led the Panthers with 19 points and four assists while Jimmy Price had 12 points and seven boards.