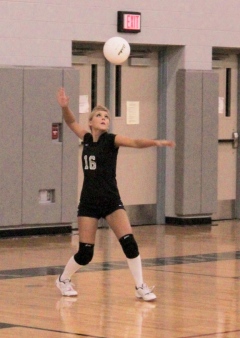 The Mansfield Tigers earned a 3-2 victory over Wyalusing in volleyball action on Tuesday night.

Mansfield was led by Marissa Tice with 15 points and Courtney Dibble with 11 digs and 15 points. Kelsey Tice had seven kills, Felicia Bolt had six kills and Garri Ogden finished with 13 points.

Brooke Maloney had 11 points, six aces and four digs for the Wildcats, while Jessica Beck had 10 points, three aces, three digs, 13 kills and a block.

Searah Kennedy had three points, an ace and six kills, Hilary Crawford had four points, a dig and a kill, Emily Elsbury had two points, a dig, a kill and a block and Kaitlyn Serfass had four kills

Cowanesque Valley got 11 points from Renee Sauman and nine from Kaitlyn Koester.

Maggi Mahonski had three points and Kristy Swain finished with two points for the Wildcats.

Athens is at Wyalusing on Thursday.

The Troy Trojans opened up NTL volleyball action with a 3-0 victory over Northeast Bradford on Tuesday.

Courtney Woodward had five digs, Kalie Pick had a kill and a dig, Jordan Ellsworth had a kill and an assist, Kendall Lathrup and Amelia Young each had a dig and Sarah Werner finished with one point.

The Panthers got a kill from Luanne Antisdel, while Michaela Kuhlman had two points, Courtney Emick finished with eight points, an ace and a kill and Kaitlin Brink had a point.

Melissa Hulslander had a point and an ace, Kristn Kiner had two points and two aces, Samantha McCaslin had 14 points and three aces and Danielle Newman had three points and an ace.

Troy is at Galeton on Thursday.

Williamson picked up the victory in the battle of the Warriors on Tuesday.

Kellsy Ross had three points, seven digs and four kills and Bridget Tracy finished with two points, an ace and nine assists, while Michaela Gaiotti had three assists, 14 digs and a kill.

Canton is at Towanda on Thursday.

The Tigers went on the road and picked up the win to stay unbeaten on the season.

Taylor Carey had five kills for Odessa and Morgan Stermer had three blocks.