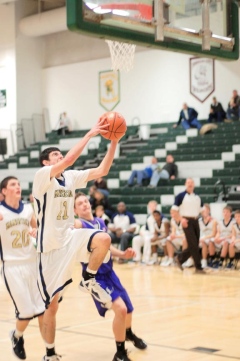 The Sullivan County Griffins hadn't beaten Hughesville since 2004 when a Vinny Baumunk-led squad topped the Spartans in the first game of the season.

They knew that it wouldn't be easy to end that skid on Wednesday as they entered the game without one of their key players in Sharif Whelton.

But, a balanced effort with three players in double figures helped the Griffins come away with a 47-37 victory.

"Obviously going into the game that was a concern," Sullivan County coach Glenn Vaughan said of playing without Whelton. "It hurt us from a lot of different standpoints. Sharif is a great player. But every single player just believed we were the better team and our defensive effort was phenomenal. Hughesville is a great team and they will rebound from this. But, I have to give credit to our guys for a great effort."

For the Griffins it was a big win.

"Definitely since I started coaching we have always lost by big losses to them and they have been the better program. It's big for our kids, it should be great for our confidence.

"We have a really good relationship with them. It's a friendly rivalry with that team. We compete in a lot of the same offseason stuff and their head coach is one of my best friends. You could see an extra level of emotional investment in the game."

While Hughesville always has a vocal crowd, Vaughan was really impressed with the Sullivan County crowd on the road.

"Our community, our students, teachers, Sullivan County travelled extremely well tonight," he said. "The energy our kids got from our fans tonight was huge. The support we had tonight from the community and Sullivan County was awesome."

Derek Wilkins led the Griffins with 16 points and Zach Meyer had 12 points, while Kelby Mullen finished with 10 points and five assists.

Conner Wylie had seven points, 10 boards and two blocked shots and Dalton Molyneux finished with two points in the game.

Hughesville won the JV game 57-45 with Sean Flannery leading the Griffins with 13.

The Griffins are at South Williamsport on Tuesday.

ELMIRA, N.Y. - The Tigers trailed 13-9 after one quarter, but outscored Hammondsport 44-29 in the next two quarters to get the victory.

Alec Simpson led Mansfield with 21 points and five boards, while Taylor Hillson had 18 points and four steals, with seven rebounds, in the victory.

The last time the Warriors and Panthers met it was a close game.

On Wednesday it was even closer, with the Warriors coming away with the overtime victory.

North Penn led by six entering the fourth after they had a 14-point third quarter, but Williamson outscored North Penn 15-9 in the fourth to get the win.

Drew Fish had four points in overtime and Devon Smith hit a three in the extra period.

Smith, Ryan Bidlack and Derrick Vargeson each had 10 points in the game and they combined for 10 of the 15 fourth-quarter points.

Hunter Huyett had five of his eight in the fourth and Fish had eight points in the game.

Jimmy Price led North Penn with 18, including five in overtime, and Jason DeHaven had 14, with eight of those, including two threes, coming in the third.

Canton outscored Liberty 18-2 in the second to pull away for the victory.

Eddie Larcom had a double-double with 19 points, 10 steals and six assists and two blocks, while West Moore had 10 points and nine boards.

Liberty got nine points from Jacob Spring and J.J. Walker had six points, Tyler Upham had five points, while Cody Schmouder and Eric Kreger each had four points.