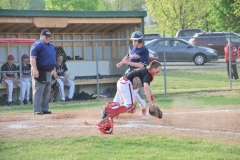 The Canton Warriors got a run in the fourth and two in the fifth to rally from an early deficit and defeat Williamson 3-2 on Wednesday.

The victory was the 300th for head coach Bob Rockwell.

"Williamson played a real nice ball game against us," Rockwell said. "Canton, when I've been here, we've had a lot of good players. And, I've had some really good assistant coaches to. Jay Perry for many, many years, Craig Route and now Lyle Wesneski.

"It's a testament to all the players. We've had some really good players throughout the years."

Canton got two hits, with an RBI and a stolen base from Ben Pepper and Chase Pepper, Lyle Wesneski, Josiah Barto, Emmett Watson, Connor Route and Scott Rockwell all had hits.

Rockwell stole a base, Route, Watson and Barto scored runs and Wes Moore had an RBI.

The Panthers battled back, scoring three runs in the bottom of the seventh down 10-7, to force extra innings on Wednesday.

Due to darkness the game was suspended and will be completed at a time and date to be determined.

"I was pleased, we were down, we came back," Northeast Bradford coach Brian Pifer said. "Our pitchers did all right. I'm proud of the boys, they didn't give up, they didn't give in. It's something we have worked on this year, even though it hasn't shown up in the win column yet.

"It's always a confidence builder when you put kids into positions and they do well and they realize they can play at this level. It's something we've been working very hard at and I give the boys a lot of credit for battling today."

Both teams were aggressive on the base paths, the Panthers stealing 16 bases on 16 tries and the Green Hornets getting 10 steals on 11 tries.

Ben Abell had a hit and an RBI, Jeremiah Harvey had a hit and two RBI and Cody Clark had a hit, while Jesse Stroud and Austin Saxer each stole a base and scored a run.

Brandon Owlett had two hits, a double, a triple, a run scored and an RBI and Brandon Grinell hit a solo home run.

Abell worked two innings for the Panthers, striking out one, walking three and allowing two hits and two runs, both earned. Stroud worked three innings, striking out three and Andy Seeley worked 1 1/3 innings, while Bill Franklin worked 2/3 of an inning.

Lyons started on the mound for Sayre, striking out eight, and Delbert Lewis started for Troy, with Lucas Havens pitching in relief.

Havens was 5-for-5 with two stolen bases, a run scored and two RBI and Josh Mattocks had two hits and two RBI.

Lewis and Chad Vermilya had hits, with Vermilya's being a double, while Tyler Hodge scored two runs, Landis Zimmerman and Jason Esias each scored runs and Justin Fitzwater stole a base.

Athens took an early lead in the bottom of the first as Adam McCauley scored off a Curt Moore double.

CV retaliated in the top of the second as Brandon Whitesell and Josh Nudd scored to put the Indians up 2-1.

In the bottom of the fourth Athens retook the lead as Craig Moore and Mike Estes scored. The Wildcats would hold on from there.

McCauley, Craig Moore, Curt Moore and Estes all had hits with Moore driving in a run.

Nudd and Whitesell had the two lone CV hits while Mitch Dent scored the loss. He struck and walked none while allowing four hits.

The Black Knights got five runs in the first and seven more in the second on their way to the victory.

"I was pleased with the way we pitched," Towanda coach Bill Sexton said. "I thought (Sawyer) Strope came in and threw really well. He handcuffed them, he did what he needed to do. It was good to see him throw strikes. Offensively we took advantage of the opportunity to hit the ball. WE came in and played up to our level of play."

Strope struck out four in two perfect innings to get the win and Brandon Dinelli struck out three, walked one and allowed on hit and one run in two innings.

Casey Huff was 3-for-3 with a pair of runs scored, a stolen base and an RBI and Dinelli had two hits, with a triple, an RBI and a run scored.

Galeton's Thomas Ross had an RBI single and Chris Kirby scored for them.

Towanda is at Canton on Friday.

Logan Hitchcock had a triple and two RBI, Andrew Pickett had two RBI and a run scored and Mitchell Pickett and Dominic Ciccolini each scored runs.

Mansfield got two hits each from Taylor Hillson and Sam Rotella and Logan Wise and Jeremy Wiles scored runs, while Ben Wilson had a double and an RBI.

Wyalusing is at Athens on Friday.

The Griffins fell behind 2-0 after one inning and got a run back in the fifth but couldn't get any closer.

Sullivan County got two hits each from Kelby Mullen, Tom Blasi and Jake Gavitt, with Mullen getting a double and Gavitt an RBI. Barry Heinrich had a double and scored a run.

Zach Meyer struck out five, walked one and allowed eight hits and two runs, both earned for the Griffins, while Brock Danicker struck out eight for Neumann.

Sullivan County is at Muncy on Friday.

The Tigers scored all seven runs in the fourth and fifth innings to pick up another close IAC win Wednesday.

Ryan Verguson was perfect at the plate for Tioga, going 3-for-3 with two runs scored while Cody Bennett was 2-for-4 with a double, home run, RBI and run scored. Peter Simmons went 2-for-3 with 3-RBI while Eric Zwierlein, Jake Howland, Zach Williams and Dakota Skinner all had hits with Zwierlein's and Williams' a double. Zwierlein added 2-runs while Howland and Williams both had a run scored and RBI.

Zwierlein scored the win, going the distance for four strikeouts while allowing one walk, eight hits and just one earned run.