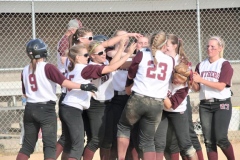 EAST TROY - In a matchup between the NTL East leading Northeast Bradford Panthers and the NTL West co-leading Troy Trojans, the Panthers proved to be too much, coming away with a 10-2 victory.

With Troy out west this year, things were a little different in this matchup.

"We only get one shot at them this year, so we wanted to come out with a lot of intensity," Haylie Phillips said.

"We tried to play this game like they were still in our league," Chelsie Souto said.

After a close game against Wyalusing on Wednesday, the Panthers wanted to come out strong in this one.

"We wanted this real bad," Nicki Emick said. "We wanted to come out with a lot of desire and get the lead and not have to catch up."

For Emick the home run was something she has been waiting to do for a while.

"It felt really good," she said. "I hope this helps me get out of this slump."

Kelsey Goodwin had two hits, with a double and three RBI and Calla Martin and Courtney Coleman each had hits. Martin scored a run and Coleman's hit was a double, she had a run scored and two RBI.

Kelsey Carlsen had an RBI and scored twice in the game and Phillips scored a run.

"We both pitch differently," Souto said. "We both help each other out a lot."

"It keeps the other teams off guard, not knowing who to expect," Phillips said.

In recent games Souto had started, so Phillips was happy to get the call in this one.

"It was a lot different, I just tried to get my control and get through it," she said.

And, Souto came in relief, something she hasn't done a lot this year.

"I didn't expect to come in at all, I was on the bench," Souto said.

In the end, the two combined to limit Troy to four hits and strike out five.

Troy got hits from Kara Schucker, Tiffani Mattocks, Taylor Johnston and Hannah Jackson and Schucker and Johnston had RBI. Tiffany Jerzak and Faith Ceely scored for the Trojans.

Jackson and Schucker combined on the mound for Troy, striking out one.

The Panthers hope this win will start them on the right track as they head toward the second half of their season.

"Hopefully it sets the tone against the NTL West," Emick said.

Laci Holdren went 4-for-4 as the Rams used a 6-run fourth inning to pull away from the Indians in cross-over NTL action Friday.

Holdren also scored three runs while Ally DeVoir and Cathryn Pugh both went 3-for-4 with two runs scored. Pugh knocked in four runs while DeVoir had an RBI.

Arielle Kneller and Crystal Shirk had two hits each with Kneller adding two runs and 2-RBI.

Casey DeVoir, Cierra Holland, Emily Faulkner and Lauren Chadwick had one hit each. Casey DeVoir added an RBI with two runs scored, Holland scored twice while Faulkner scored once with an RBI.

Faulkner got the win, striking out five while allowing two hits, one walk and one earned run.

Shanelle Ianson and Michaleia Mead had the two CV hits while Ianson took the loss. She struck out two while allowing two walks and 18 hits.

The Green Hornets got two runs in the bottom of the eighth inning to pick up a 10-9 victory over Canton on Friday night.

Canton scored in five of the first six innings, and led 7-3 entering the bottom of the fourth, but a five-run fourth got the Green Hornets back in the game.

After the Warriors took a 9-8 lead in the top of the eighth, Peyton Wilson walked and with two outs she moved to second on a wild pitch and scored on a Lauren Bleggi hit. Bleggi came around to score on an error by the catcher who threw the ball into center field.

Maggie Smith was 3-for-4 in the game for Wellsboro, hitting a first-inning home run and driving in four and Bleggi had three hits in the game.

Smith struck out four and walked six for Wellsboro and Brooke Kohler finished up, striking out three and walking one.

The Black Knights got two home runs from Michelle Aronson and Emily Gorman also had a home run in the victory.

Aronson had three hits and scored three times in the game.

Alaina Wickire had three hits and scored four runs and Kylie Cazassa had a hit, while Mackenzie Roof had a hit and scored a run.

Alaina Wickwire got the victory on the mound, pitching all five innings, allowing two hits and striking out four, while walking two.

The Redskins scored five runs in each of the first, fourth, fifth and sixth innings on Friday night.

Mataya McPherson led Galeton with a triple and Shaleigh Proctor had a hit.

Kristyn Tappan had eight strikeouts and walked two on the mound for Sayre, tossing a three-hitter, and McPherson struck out two and walked two in the game.

Spencer Van-Etten scored all 14 runs in the first for innings to build a 14-7 lead, but Waverly scored nine times in the sixth and seventh innings to get the win.

Cassidy Farr had a hit, Stephanie Bellis had two hits, with a double and Carmella Ruth had two hits for Waverly.

Crissi Blaasch had an inside the park home run for Spencer and Lisa Nelson and Hannah Lawrence each had doubles.

The Wildcats got two hits each from Christin Dunkling and Katelyn Serfass.

Dunkling had a triple and Serfass had a double in the game.

The same two also combined on the mound, striking out 12. Mackenzie Hafer and Serfass each had an RBI for Athens.

Kim Daugherty had two doubles for Williamson and Sierra Magnotta had two hits with an RBI, while Nikki Hurler had a double and two RBI.

Eighth grader Brittany Vergason went 3-for-4 with two triples and a double while driving in five runs to give the young Tigers another IAC win.

As a team Tioga had 13 hits, something coach Jim Wood is pleased with.

"This is a really good team for us," he remarked. "The top of the order did a good job getting on for us, Vergason is getting it done in that clean-up spot for us."

Bry Godfrey and Sierra Beebe both went 2-for-3 with Godfrey adding a home run, RBI and three runs while Beebe had a triple, 2-RBI and crossed home twice. Sam Wood also had two hits in the game along with two runs scored.

Wood got the win, allowing one hit and no walks while striking out eight.

"I'm really pleased with all aspects of the game," Wood said. "Sam did a great job throwing, pitching a one-hitter. Defensively they played well behind her, the two errors were in one inning. They showed a lot of maturity, they bent but didn't break. For them to do that they're maturing and it's really starting to tell.

Tioga is at Watkins Glen Monday.

Alivia Clark had a double, an RBI and five runs scored and Sam Erbach had a home run, two RBI and three runs scored.

Chelsea Camilo had a hit, two RBI and three runs scored and Abby Carr had a double and a run scored. Mackenzie Maloney scored three runs and stole a base and Brooke Harvey scored a run.

Jordan Zocke and Kirsta Rhodes each had two hits for Odessa-Montour.