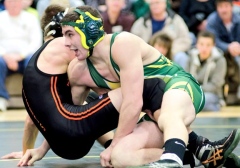 WYALUSING - Towanda led 6-0 after the first bout but that's as close as it got as Wyalusing rang off six wins in a row, including four falls, to go up 30-6 and never looked back in the NTL Large School wrestling match.

The Rams ended up winning 46-21 to remain the only undefeated team in the NTL left.

"It obviously feels really good," Wyalusing coach Gary Haley remarked about the win. "We knew Towanda had a strong team again this year and we knew there were some bouts, particularly Tyler Fenton, Justin Griffith and Clayton Force at heavyweight, we thought some of those matches toss-up matches. We wrestled really well and came out on top in a lot of those matches. Anytime you are able to beat Towanda it certainly feels good."

"It's a little of a grudge we've been holding," remarked Force. "It's one of our goals we've been looking forward to getting."

"This is great," added Tim Kuntz. "We've been looking forward to it, we went for it and everybody wrestled perfectly. We came out on top by a lot."

This doesn't clinch it for the Rams but they are certainly in the driver's seat.

"We still have Northeast and Canton down the road yet," remarked Haley.

The veteran coach was hoping to start in the lower weights but ended near the middle at 152.

"In some ways we were hoping to start down low," Haley explained. "We have some senior laden guys in the middle there with Ryan Hart, Timmy Kuntz and Joey Champluvier. We started at 152 so we were able to finish with Timmy, Ryan and Joey in end."

It all worked out, though.

"Starting out at 152 wasn't such a bad thing," added Haley. "We had those guys waiting in the wings. If it comes down to a tight race in the end we have those guys there."

Towanda's Zack Ripic started things off fast and furious at 152 for the Knights, scoring off the bat and building a 13-3 lead heading into the third period. Wyalusing's Tyler Thompson was able to hold off the fall, but roughly halfway through the final period Ripic caught Thompson on his back and scored the fall at 4:52.

Wyalusing's Tyler Fenton knotted things up at 160. Fenton scored two takedowns in the first period to take a 4-1 lead. Fenton scored another takedown in the second and used that to catch Towanda's Trey Sites on his back. With 28 seconds left in the second period the fall was called and the score knotted up at 6-6.

The 170 pound match started off with the same excitement that the match before ended with. Wyalusing's Dan Frankenfield caught Towanda's Cody Claupein in the air and took him down for two. Then just before the end of the period Frankenfield put Cody Claupein on his back for three back points but the buzzer sounded before the fall could be called.

Cody Claupein was able to keep Frankenfield down for much of the second period but the senior Ram scored and escape and added a takedown to go up 8-0. An illegal hold call on Frankenfield gave Cody Claupein one as they entered the third.

Frankenfield once again took to the offensive, getting a takedown on a shot and turning Cody Claupein for three back points but Cody Claupein held off the fall.

Frankenfield kept at it, putting Cody Claupein his back again, and with 6.8 seconds left got the fall to put Wyalusing up 12-6.

The 182 bout began scoreless as neither Towanda's Dalton Claupein nor Wyalusing's Justin Griffith was able to get a takedown.

Griffith started the second on top but once again the stalemate continued as they entered the third still tied at 0-0.

Dalton Claupein took his turn on top in the third and halfway through was trying to turn Griffith when he lost his grip and Griffith turned to score a reversal, giving the Ram a 2-0 win.

Wyalusing extended their lead to 15-6.

Senior Ram Anthony Clark made quick work at 195, getting a takedown in 15 seconds over Towanda's Bristin Robinson, then pinning him in 46 seconds to put Wyalusing up 21-6.

At 220, Wyalusing freshman Dylan Otis looked to do the same to Towanda's Joe Cantale, scoring a takedown, but Cantale held off anything more. In the second Otis scored an escape and added a late takedown to go up 5-0 heading into the final period.

Cantale started on bottom to start the third and Otis used it to his advantage, working Cantale to his back. There he got the pin in 5:18 as the Rams began to run away with the match 27-6.

After a scoreless first Worthington took the lead in the second with an escape. Battling neutral Force went on the offensive, looking for a shot throughout the rest of the second but Worthington held him off to keep the lead into the third.

The third began with Force scoring the quick escape to knot things up at 1-1. The stalemate ensued as the match went into overtime.

Worthington looked to win the match in the first overtime as his shot caught Force on the legs and knocked him down. However, he didn't have enough to get the takedown and force went out of bounds, sending the match into the second overtime.

In the second, Force began on bottom and got up quick to pull a reversal on Worthington to take a 2-0 lead into the third overtime.

In the third, Worthington was able to score an escape but didn't have enough time to catch Force.

At the turn Towanda was able to get back into it.

Wyalusing's Austin Shaffer was able to score the first takedown at 106 but Towanda's Kyle Blascak turned the tables with a reversal and managed to get the fall with nine seconds left in the first, cutting the deficit to 30-12.

Leading 2-0, Kelley took the top in the second and was able to ride him to keep it 2-0 heading into the third.

Kelley scored an escape to start the third, taking a 3-0 lead, then followed that with another takedown.

Lamphere earned a point as they started neutral. Kelley was able to get underneath Lamphere again for a third takedown, building a 7-1 lead and went on to score the decision to give Wyalusing a 33-12 lead with five bouts to go.

Towanda's Terrick Vargason scored a takedown to start the 120 pound bout then added two more points to start the second 4-0.

Vargason began the second on top and used that to score three back points but Wyalusing's Justin Haley was able to keep off his back.

Haley was began the third on top but couldn't turn Vargason as he was called for an illegal hold to put the Knight up 8-0. Vargason then scored a reversal to make it a 10-0 major decision victory.

He used a quick shot to catch Wyalusing's Ryan Force on the defensive then scored a takedown. Maynard added two back points to take a 4-0 lead into the second period.

Maynard continued to score in the second, first earning a reversal that he used to catch Force in a cradle. The Knight turned Force for three back points but wasn't able to get the fall.

Maynard kept the scoring up in the third scoring six more points to get the technical fall 15-0 in 5:48.

Wyalusing got back in control at 132 as Ryan Hart scored a quick takedown over Towanda's Bruce Hildebrandt. Late in the first, Hart caught Hildebrandt in a cradle and scored three back points to take a 5-0 lead.

Hart added a reversal in the second while Hildebrandt came back with an escape. They started neutral, giving Hildebrandt another escape point, but Hart came back with a takedown and two more back points to go up 11-2. Hart would take home the major decision which put Wyalusing up 36-21, sealing the win with two bouts to go.

Wyalusing wasn't done yet, though, as at 138 Tim Kuntz scored a takedown and three back points over Towanda's Dylan Mayers. Kuntz used that to get the fall in 1:35.

At 145, Wyalusing's Joe Champluvier struck first in the back and forth first period, scoring a takedown over Towanda's Tristan Decker. Champluvier added a reversal to start the second but Decker scored the escape to keep it 4-1. Champluvier came back with a takedown late in the second to go up 6-1 into the third.

The score held in the third, giving Champluvier the decision and giving Wyalusing a 46-21 win over their rivals.

Beyond the NTL Haley is also trying to get his team ready for the District IV Duals.

"We could end up seeing a could team like Towanda or Troy," he said. "We've got a lot of work."