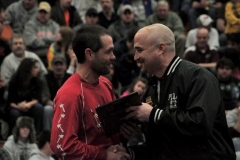 WILLIAMSPORT - Saturday marked the highest of highs for some area wrestlers and the lowest of lows for others as 18 wrestlers qualified for next week's regional tournament, while the rest of the area's wrestlers saw their seasons come to an end.

While 18 earned a chance to move on, one of the region's best won't be able to make that trip.

Sullivan County's Shawn Nitcznski had earned a spot in regionals after reaching the third/fourth place match, however an injury will bring an end to his season.

"He twisted his ankle going out of bounds, I guess he cracked It," Sullivan County coach Bob Hembury said. "He's done. I guess they have to cast it on Monday."

After making states last year, this is a tough way for the season to end for Nitcznski.

"It's a big blow, but what can you do about it," Hembury said. "He's been in this sport a while. He knows what can happen. He'll bounce back, he's a good kid. He's a tough kid. It's definitely just one of those freak things."

With the injury to Nitcznski, Canton's Daniel Killian, who finished in sixth place at 113 pounds, will advance to regionals.

"We are happy to have three moving on," Canton coach Tim Ward said. "To get two of the three in the third and fourth place match. Garrett (Wesneski) and Connor (Route) wrestled well.

"It's unfortunate the way that Daniel got through. He gets to have a second chance, but he's not the type that wants to get through that way. But, he's happy to get another shot."

Two area wrestlers brought home championships and both were from Williamson.

For the Williamson Warriors it was two champions and one runner-up. Tyrus Hamblin (106) was a 12-2 major decision winner over Mifflinburg's Noah Kuba and at 126 Billy Barnes won 5-0 over Line Mountain's Mason Zimmerman.

Logan Everett fell in the 120 final in sudden victory 2-0 to Cole Walter of Mifflinburg.

Hamblin and Barnes become the fifth and sixth district champions in Williamson history.

"This feels great," Hamblin said. "I am very proud of the team. The coaches pushed us hard and we really have improved a lot."

When the year started Hamblin was wrestling 113, but he made the drop to 106 for the postseason.

"At first it was a tough choice," Hamblin said. "At first I didn't want to do this, I was really nervous, but it feels good. It worked out and I'm happy I did it."

Now, Hamblin's goal is to try and get to states.

"That's my big goal," he said. "It feels good to be moving on and to have a chance."

For Barnes it was a special feeling to be district champion.

"I'm pretty excited , it feels good," Barnes said. "We all worked really hard. It helps a lot having others, we all push each other."

Like his teammates Barnes' goal is to reach states.

"That's been my main goal all season," Barnes said.

Losing in the final was tough for Everett, but he is happy to be moving on.

"It's definitely great," Everett said. "I would have liked to have won like the other two did, but I will just work hard and come back next week and try and earn a trip to states."

For Everett it is a lot of fun seeing three Williamson wrestlers in the finals and he knows they all push each other.

"Definitely with all of us we work well together," Everett said. "We are all underdogs here, except probably Tyrus, and we wanted to show everyone that we are for real. I couldn't ask for better partners to push me and make me better."

Williamson coach Mark Everett was proud of what his team accomplished.

While this is something that Everett thought his wrestlers could do, he knows nothing is a given when it comes to the postseason.

"This tournament amazes me with how good and competitive it is," Everett said. "It really is a deep tournament. You feel awful for those kids that take sixth place. And, we have been there before, so it feels nice to be where we are now."

"I'm real happy," Green said. "I have worked hard to have a good senior year."

While Green wasn't able to win the district title, he is happy with the way he's wrestling as he prepares for regionals.

"I feel real good, I feel confident," he said. "I just have to go back to practice even harder this week."

Making it to states is the only thing in Green's mind.

"It's been my main goal the whole year," he said. "This is what I have trained all year for."

While Ripic is happy to be moving on, he's not happy with what happened in the final.

This was the second time this year Ripic has lost to Preisch and he'd like a third shot at him.

Towanda coach Bill Sexton was happy with what his team did on Saturday.

"The goal was to move on," Sexton said. "We came here with six and two are moving on. This time of year you want to wrestle for four weeks.

"The key thing that everyone needs to understand is it's a fresh start next week. It's a new shuffle of the deck."

North Penn had two finalists with Nathan Stettler falling 7-4 to Eric McCracken of Central Columbia at 220 pounds and Nathan Kriner fell 10-1 to Nazar Mironenko of Mifflinburg at 285 pounds.

"I'm pretty disappointed that I lost," Stettler said. "But, now I know what I've got to work on."

After falling to McCracken, Stettler really wants to make a run next week and get a chance to try and win a title.

"Now I am really itching to get back o the finals," he said.

"We just keep getting better and better," he said. "He (Kriner) is my training partner and I am really happy that he made the final."

For Kriner it was nice to make it to the finals.

"I'm pretty excited," Kriner said. "I'm really proud we both made the finals. We push each other and make each other work hard."

North Penn coach Craig Pequignot was happy with what his team accomplished.

"It's great," he said. "We were expecting a good outcome here and we got it. It gives the kids confidence going into next week."

Sexton was happy to see Maynard moving on.

"I'm really pleased with Dale," Sexton said. "Dale is a really good wrestler. He has had to deal with some things that he can't control health wise. He has had a real solid tournament. Now he gets a chance to move on and perhaps make it to the state tournament."

Fifth-place finishers were Troy's Clint Vermilya, a 5-1 winner of Brian Smith of Sullivan County in the fifth-place match and Wyalusing's Joe Champluvier was a 7-2 winner over Milton's Taylor Porter for fifth place.

Wyalusing's Tyler Fenton earned a fifth-place finish with a 5-1 victory over Garrett Evans of Montgomery at 160 pounds in the fifth place match.

The top five finishers at each weight class advance to regionals.

Just missing a trip to regionals with losses in the fifth place matches were Ethan Calkins of Troy at 106.

Smith finished sixth after the loss to Vermilya and Chad Vermilya fell in the fifth-place match at 126 pounds.

Wyalusing's Dan Frankenfield lost a tough 1-0 decision at 170 pounds against Montgomery's Garrett Shnyder to finish sixth and the Rams' Clayton Force fell in the fifth-place match at 285 pounds.

District 4 team champion Wyalusing had no champions, but they did have four wrestlers advance to next weekend.

"We ended up getting four through, we had hoped for a little more than that," Wyalusing coach Gary Haley said. "Some of our kids suffered some real tough losses. Ryan Hart is a senior and has been here before and he had a couple of tough losses. I feel bad for some of the kids like Ryan and Tim (Kuntz).

"Dan (Frankenfield) is another one of the seniors who came down and wrestled well. It's so tough down here. Dan certainly could have been in a final, he lost in overtime in the semifinals, but that's the way it goes down here sometimes."

While the Rams might have wanted more, they are happy to have four moving on.

"I'm proud of all the kids, even the kids that did not make it out," Haley said. "We have two underclassmen going in Dylan Otis and Tyler Fenton and they get another level of experience. They worked very hard to get here.

"We have two seniors advancing Joe Champluvier and Anthony Clark and I am real proud of them. Anthony lost a tough 3-1 match to the Mankey kid from Benton and he's a good kid and he just did a good job to come back from that. Joey I am just ecstatic for. Last year he was down here and he lost a heartbreaker in the fifth/sixth place match where he was leading. It's great to see him moving on."

Towanda's Zack Ripic was named the winner of the Max Schnyder Scholarship and Tyler Thompson of Wyalusing was one of the two winners of the District 4 scholarship award.