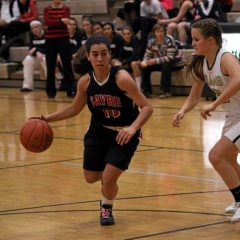 The Rams jumped out early, taking a 15-8 first quarter lead and extending it to 26-16 at the half. The Redskins then turned the tables in the third quarter, out scoring Wyalusing 21-9 to take take a 37-35 lead going into the fourth quarter. Sayre would finish it out strong, holding the Rams to six fourth quarter points.

Sayre won the JV game 38-36. Kaeli Sutryk had 15 points to lead Sayre while Tracy added 14. Erin Canfield and Brook Force had 10 points each for Wyalusing.

TOWANDA - The Tigers jumped out early and never let up as they picked up an NTL girls' basketball win Monday.

Mansfield led 13-6 after the opening quarter and pushed the lead to 34-12 at the half.

Kaitlin Hallabuk had 12 points and five boards to lead Towanda while Allison Daum added six. Macareno Toledo scored four while Casey Hawley and Laci Manning had two each, with Manning adding three steals. Alliesha Koss had one point to round out the Knight scoring.

Towanda won the JV game 18-9 behind six points from Daum.

ATHENS - The Wildcats used some stingy defense in the middle quarters to pull out an NTL girls' basketball win Monday.

Athens held a narrow 11-8 lead after the opening quarter but held CV to four points in the second to pull ahead 24-12 at the half. In the third they out scored the Indians 11-1 to secure the win.

Hayley Painter had 11 points to lead CV while Kayla Schauer netted four. Whitney Earl and Sam Burns had two points each while Amanda Painter scored one.

Athens won the JV game 39-11 behind 13 points from Shanelle Baglini.

TIOGA - Lori Horton had 23 points, 22 rebounds and eight blocks to the Wariors to an NTL girls' basketball win Monday.

It was a close battle throughout as Williamson led 12-11 after the first quarter. Liberty kept it a one point deficit to the fourth quarter and cut it to 35-33 at one point. Horton then scored four straight points to put the Warriors up 39-33. A Malorey Sponenberg free throw cut it to 39-34. The teams would trade buckets followed by Horton scoring late to make it a 43-36 final.

Sierra Szwec had 17 points while Mikayla Short added 15 as Candor pulled away from Tioga in IAC girls' basketball action Monday.

Candor led 12-7 after the first quarter and pushed that lead to 29-18 at the half. They out scored the Tigers 31-17 in the second half to secure the win.

Olivia Howland had eight points and six boards to lead Tioga while Taylor Ayres and Kaylen Burrge had seven points each, Ayres also had three steals.

Candor won the JV game 28-17 as Kierstyn Swagler had eight for Tioga.

Kendra Brown had four points to lead NRCS while Larissa Alteri and Caroline Chandler had three points each. Olivia Noone, Emily Lykens, Corrine Delp and Carianna Miller had two points each.