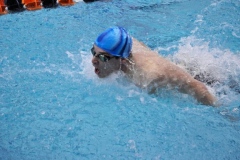 LEWISBURG - It was a successful day for area boys at the PIAA Swimming and Diving Championships.

While Frank Chen is bringing a medal home to Athens, the other three area swimmers also had big days at states.

While Frantz wanted a chance to bring home a medal he was happy with his performance, especially after entering with a seed time of 2:03.11.

"It was my best by two seconds," Frantz said. "I knew I had to go out fast in the fly and the back. In districts I died in the free near the end and I knew I had to kick to the finish in the free. It felt really good."

A year ago Frantz earned a trip to states, and he thought nerves got to him a little bit. This time he was more ready for the atmosphere.

"I was really nervous there when we were getting ready, but when I got up there I knew I was ready for this," Frantz said.

After swimming a personal best Frantz knows there wasn't a lot more he could have done.

For the Sayre junior having a day like Wednesday just makes him more excited for next year.

"All year I said I wanted swim season to end. I wanted the practices to end. Now that the season is practically over, I don't want it to end."

For both swimmers it was their first chance to swim at the state meet.

"It was amazing, it was a lot of fun," Burlingame said.

"It was pretty awesome," Hill added.

For Burlingame winning the heat was a pretty special feeling.

"It was not really the first thing on my mind," Burlingame said. "I was just hoping to not take last."

For Hill it was the second straight sports season he qualified for states, after making it in cross country as well.

"I am really happy I made states in both," he said. "I didn't believe this would happen."

One thing that made the heat a little fun for both swimmers is that Hill was in lane four, Burlingame was in six and in between the two was Danville's Zach Smith, putting three District 4 swimmers in a row at states.

"It's nice to know someone," Burlingame said. "It makes you feel better."

For both swimmers the atmosphere of states was something they really enjoyed.

"There are a lot of people here, it's pretty cool having this many people here," Burlingame said.