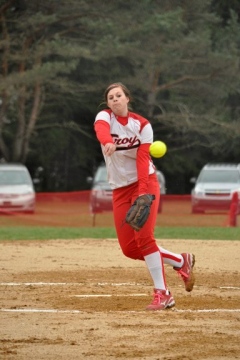 EAST TROY - For Kayla Stephani, and her Troy teammates, the ninth inning on Thursday provided a chance at redemption.

Two innings earlier Stephani had struck out in a scoreless game against Northeast Bradford with a runner on base.

Given another chance Stephani delivered, lining a two-out single that brought home pinch runner Bethany Manley for a 1-0 win over the Panthers.

"I got a chance to redeem myself. I was thinking I needed to get a hit and get the girl home from third," Stephani said.

For the Troy team Thursday was also a chance to redeem themselves after a loss at Towanda in their NTL East opener.

"This was amazing coming off Towanda," Kelly Bridgham said. "It was important because every year we have come out and pretty much been fighting for the league lead. It is good to show people that we are not going to roll over this year. That we are going to fight. It was good to make a statement."

In the ninth it was Bridgham who started things off as she lined a single to left that rolled past the outfielder, allowing her to get to second.

"I have been struggling hitting the ball the last few games, so it was good," Bridgham said. "It was good to start things off."

With Manley pinch running for Bridgham, she moved to third on an out off the bat of Kelsey Bristol. After Northeast Bradford got a second out, Stephani delivered the game-winning hit.

"I thought it was going to be right down the middle because it was 3-0 and I had to get a hit," Stephani said.

The Trojans had their chances in the game as they pounded out 11 hits in the loss and they had a runner on base all but one inning of the game.

In the eighth inning the Trojans were in the same situation with a runner on third and two outs, but Northeast Bradford pitcher Chelsie Souto got a fly out to end the inning.

"We were right on the edge, we had chances, we just needed a couple of hits to break it open," Bridgham said.

Bristol, Stephani, Faith Ceely, Bridgham and Tiffani Mattocks all had two hits in the game for Troy and Taylor Murray also had a hit for the Trojans.

"We have a lot more confidence off this one, especially coming off the Towanda game," Bridgham said.

While the Trojans had 11 hits, Souto struck out six and walked just two in keeping Troy off the board for eight innings.

However, the Panthers offense struggled to get anything going as Kara Schucker scattered just four hits over nine innings, striking out four and walking one for the shutout.

"It was really nice," Schucker said of the win.

Going nine innings on a cold day started to get tough for the Trojans pitcher.

"My arm kind of was tightening up," she said.

While Schucker was good, her defense also stepped up behind her.

"I'm really proud of them," she said.

The Panthers got hits from Mady Johnson, Calla Johnson, Bridget Haverly and Julia Williams in the loss.

The victory puts Troy at 1-1 in the NTL East, while the Panthers fall to 1-1 in the league.

"It's great, it shows we can win and compete," Schucker said.

The Panthers are scheduled to host Towanda today, while Troy hosts Wyalusing, both games at 4:30 p.m.