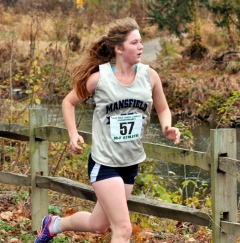 HERSHEY - A year ago Towanda's Katelin Purdy was just a spectator at Hershey.

After missing the state meet by just one spot all Purdy could do was watch as other NTL runners brought home state medals.

On Saturday the junior was back in Hershey, but this time she was one of the people coming home with a state medal.

Purdy finished 18th in the Class A race in 20:17, the only NTL girl to bring home a medal this year.

"It feels amazing," she said. "It's been my goal the entire year."

While Purdy has run well all year, she's been at her best the past couple weeks, winning the district title and now bringing home a state medal.

"My coach said I am peaking at the right time," Purdy said.

As the runners came down the starting stretch off the line on Saturday the Towanda junior was leading the pack off the start.

"I didn't want to get boxed in," Purdy said as to why she went out fast.

Running with over 200 runners behind her at the start was something Purdy has never experienced before.

"It felt kind of crazy," she said.

For Purdy after missing states last year, this was the perfect way to cap this year.

"This is all I have dreamed about the last year," she said.

Mansfield's Violet Learn finished 40th in 21:00 to lead the Tigers to an 11th place finish as a team with 253 points. Holy Cross won the team title with 64 points.

"It was alright," Learn said. "I am thankful I got here."

For Mansfield's runners it was a whole new atmosphere at states.

"It was pretty good," Weiskopf said.

"It was so packed," Rohl said.

The Mansfield runners had to get used to their packs not being so close at states, and they had to adjust to the big fields.

"I kept looking to see where Erin was," Weiskopf said.

"It was different," Dempsey said. "I'm not used to always being around so many people. Usually you have sometime during a race you are by yourself."

For the runners bigger fields can have things that you have to adjust to during the race.

"A girl spiked off the back of my shoe and I had to run part of the race with my shoe half off," Rohl said.

Running against the best runners in the state just made Mansfield's girls want to do even better.

"So much competition pushes you," Lichty said.

Learn is the one Mansfield runner who has been to states before, but it was nice to have her team with her this time.

"It's more fun," she said. "But, once the race starts, you are still just out there racing yourself."

For the Tigers it was a great experience to be together at states.

"It was great to come here with my best friends," Dempsey said.

After medaling as a freshman last year Werner wanted the same this year, but she was happy with the finish.

Werner settled into the front portion of the field from the start, but was unable to move up into the medalists.

For the Panthers runner the plan was to decide how fast she would go out based on how she felt during the race.

While she didn't get a medal this year, getting to states for a second straight year is something special for Werner.

"It's great that I was able to come," she said.

"Today we ran our race and it went well," Jackson said. "It was nice having Jordyn back again this year, but I was missing my team. I think me and Jordyn ran a very good race and we are looking forward to next year."

Coffee was happy to see her times getting better at states.

"I think the competition is definitely getting harder and that our times were good compared to last year, which is good," she said. "The only thing that worked well for me was the down hills really helped. Either way, I think me and Jada did well and hopefully are looking forward to going next year."

"It was exciting," Hudock said. "It was definitely a new experience from anything I've ever run before."

For Hudock one of the challenges in the big races is to avoid getting bunched in at the start.

"It's really like sardines," she said. "It wasn't as bad as I have experienced at Bloomsburg where you come to an almost standstill, but it's really hard. If you get packed into the back, you never get out."

While she was in a big race, Hudock still had someone else she knew near by as she ran part of the race close to Sayre's Katherine Porter.

"It was really nerve wracking, I felt so lonely," she said of the start of the race, "About the first mile Katherine came up and touched my elbow. That was great, I knew I had a friend to race with then. I was glad she was there."

As a junior Hudock is hoping this experience will help her next year.

"It was really exciting," she said. "Next year I hope I can make it and I will know what to expect."

"It was good," Beeman said. "It was a nice experience."

For Porter, one thing that made this easier was running the Foundation race at the course earlier this year, and being in states as part of a team her freshman year.

"We were able to run here earlier in the fall so that helped," Porter said. "It was a lot of fun. I enjoy racing big competition."

The big field is still something that both runners had to adjust to.

"There is a lot of pushing and shoving," Beeman said. "It's difficult, but we got through it."

For Porter, getting back to states as a senior is a good way to cap her career.

For Beeman, who is a sophomore, there will be more chances to get back to Hershey.

"I hope to get back here the next two years," she said.