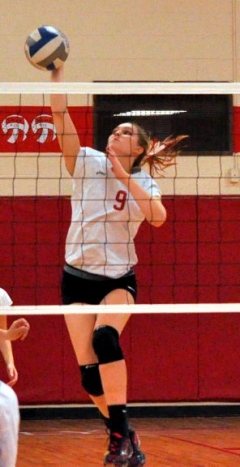 Mansfield got three points from Kaya Weeks, four from Brittany Doud, five from Jillian Berguson and Emilie Dinan, three from Miranda Hampsher, two from Sara Wolbert and one each from Lauren Smith and Abby Welch.

Mansfield hosts Canton on Saturday and Troy is at Canton for their pink game on Tuesday.

Morgan Johnson had five digs, Macy Elliott, Jayde Parsons and Amy Zhang had a dig each and Lindsay Vincent had two digs and a kill.

Liz Ennis had a kill, Jensen Nielson, Sidney Gowin and Rylee Pepper had a point each and Miller had a kill.

Peachey had a point and two kills, Alex Gannon had two points and two kills and Kendra Abrams had three kills.

Towanda is at Tunkhannock on Monday.

Waverly is at Watkins Glen on Monday.

Wyalusing got 20 kills, 22 digs and six blocks from Roni Morrison and 12 kills, six blocks and 15 digs from Madalyn Edsell in the loss.

Wyalusing is done until districts.

Williamson got 14 points from Janae Rice, who had 17 digs and Chelsea Paddock had 10 points and 14 assists, with three aces.

Jessie Patt had seven kills and 20 assists and Katie Haslund had 14 digs.

Cheyenne Fromille had four points for Canton and Brandon Fleming had three points and six kills, with two blocks, in the loss.

Kellsy Ross had three points and seven digs and Maggy Machmer had an ace and nine assists.

Kendall Knecht had 13 digs and Kelsey Griffin had seven digs.

Liz Kunkler had nine points, an ace, a block, three digs and two kills and Alyssa Mosher had five kills, an ace and four points.

Shelby Vaughn had nine assists and a kill for Sayre and Paige Wampole had four kills, while Molly Ball had two kills.

Emily Garrity had five kills for Sayre and Maria Servedio had three points and two kills.