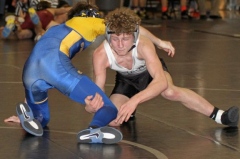 District V powerhouse Chestnut Ridge captured the team title with 246 points, followed by Muncy with 180.5 points and Athens with 146. Falconer and Coughlin tied for fourth with 134 points, Johnson City was sixth with 132.5 points and Pal-Mac was seventh with 123.

"Considering we don't have a full line-up, the kids who were here wrestled very well," said Athens coach Dale Jarvis. "They're slowly coming along."

Courtney was his dominant self, notching a pair of pins and two technical falls in his five wins.

Courtney opened with an 18-3 technical fall of Lake Lehman's Garrett Kolb, then registered a 19-4 tech fall of Chestnut Ridge's Blake Dunlap. He finished action in Pool A by decking Wyoming Valley West's James Wright in 3:36.

In crossover action, he worked a 16-4 major decision over Pool B runner-up Angelo Barberio of Muncy. In his fifth match, Courtney flattened Adam West of Pal-Mac in 65 seconds.

Barberio pinned Wright in his final match and finished second via tiebreaker criteria with a 3-2 record.

"Brian (Courtney) has the reputation that he just goes, goes, goes," said Vosburg. "So, if the kids back up, he just continues to work on them.

"He's scoring points on quality kids. He wrestled some real quality kids here today and dominated them," he added.

Roger Horton was also dominant, allowing just one point on the day. He opened with a hard-fought, 1-0, decision over Chestnut Ridge's John Heming, then decked Coughlin's Corey Harrison in 2:29.

Roger Horton finished off pool action with an 11-0 major decision of Seth Abbey of Falconer. In crossover action, he received a forfeit from Lake Lehman's Kody Pachamovitch to improve to 4-0.

In his final match, he faced unbeaten Todd Brockhuizen of Pal-Mac and earned a 5-1 decision, avenging a 5-0 loss at the Canandaigua Tournament last year.

"Roger (Horton) is probably the leader of our team right now," said Vosburg. "He's wrestling so much more aggressive this year than he did last year.

"That's the way he's treating himself in the (wrestling) room. He's wrestling real hard in the room and it's starting to show up out here," added Vosburg.

Brock Horton went 3-0 in his pool, opening with a 7-0 decision over Pal-Mac's Scott Dollar, then beating Johnson City's Tim Reed by an identical score. He finished off pool action with a 13-2 major decision over Falconer's Dexter Ormond.

In his final match, he faced Chestnut Ridge's Aaron Burkett and lost via technical fall, 15-0. Burkett recorded two 15-0 technical falls and two pins en route to a 5-0 record on the day.

"Brock (Horton) is working real hard; that whole group of sophomores is working hard and it's showing dividends as they continue to work together," said Vosburg. "It showed today with Brock's finish."

Cannavino opened with a 9-4 win over Travis Clarke of Wyoming Valley West, then dropped an 8-2 decision to eventual champ Emmerson Block of Pal-Mac in his second match.

He then edged Johnson City's Donovan Costick, 2-0, and closed out Pool A action at 3-1 with an 11-1 major decision of Chestnut Ridge's Luke Hobson.

In his crossover match, Cannavino was pinned by Coughlin's Josh Brown in 3:31 to finish fourth.

Bradley's only blemish in Pool B action was an 11-6 loss to eventual champion Corey McCormick of Johnson City. He bounced back with an 11-4 win over Muncy's Noah Gush to finish pool action at 3-1.

In his placement match, Bradley dropped a 9-0 decision to Chestnut Ridge's Morgan Deremer.

At 170 pounds, senior Cody Cain opened with a 4-1 decision over Coughlin's Derek Nunez, then flattened Falconer's Hunter Crick in 27 seconds. His day came to an end with a 5-2 loss to Chestnut Ridge's Colby Hillegas.

At 126 pounds, sophomore Kaiden Winters bounced back with a pair of wins after losing his first two matches to finish 2-2.

At 152 pounds, junior Zach Sheppeck was 1-4. His lone win was a 7-4 decision over Lake Lehman's Jake Tomolonis. He also dropped a 4-0 decision to eventual champ Anolan Rigel of Johnson City, who was 5-0 and did not allow a point.

At 145 pounds, Nick Ingrassia went 0-4 in pool action, then beat Coughlin's Mike Brown, 5-3, in the placement round to avenge a 4-0 loss earlier in the day.

Freshman 106-pounder Chris Horton was 0-5 on the day, but wrestled champion Dylan Williams of Chestnut Ridge to a 2-0 decision.

Athens returns to action Tuesday in its first dual meet of the season at Canton.

King of the Mountain

Otis won his first three matches, two by fall, before losing to Kittanning's Jacob Robb 1-0. Then in the wrestlebacks he won 4-1 in the semi-finals and took home a forfeit win in the bronze medal match.

Yonkin won his first match then fell in his second. He picked up a fall in the third round of consolations but lost in the fifth round by fall. In the seventh place match he lost to Beccahi's Luke Carty 9-1.

Edsell won his first match then lost his second. He won his third round consolation bout but fell in the fourth round match 4-2 in sudden victory to General McLane's Owen Watkins.

In the seventh place bout he fell to Council Rock South's Joe Little 2-1.

Except for his first round fall the rest of his matches were decided by two points or less.

At 285 Daniel Spalding scored a fall while at 220 teammate Jeff Klossner earned a forfeit.

At 99 pounds Wolverine A.J. Burkhart scored a 5-4 decision over Alex Samson while at 160 Waverly's Joey Peters earned a 4-0 decision.

The Wolverines then lost to Mexico 61-24.

The Wolverines finished the day falling to hosts Fairpoint 66-18.