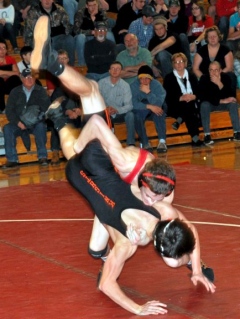 TROY - The Towanda Black Knights came into Friday's match state ranked and 13-1 on the season.

However, the Black Knights knew if they want a shot at the NTL championship this season getting wins on the road at places like Troy would be crucial.

Towanda started off on the right foot against the Trojans, jumping out to a 17-0 lead on their way to a 42-24 victory.

"This was really important," Dayton Wickwire said. "We got a lot of confidence built up from this match."

The match started at 138 with Steven Yates getting a forfeit to put the Trojans up 6-0.

After missing some time with an injury Tristan Decker was back in the Black Knights lineup at 145 and he responded with a 15-0 technical fall win in 4:09 over Diante Jones to make it 11-0.

"It felt really good," Decker said. "I didn't know what I was in for coming in. It boosted my confidence that I could come back strong.

Towanda coach Bill Sexton knows that Decker's win was a great way to get things started on Friday.

"I was real pleased with the way Tristan Decker opened up this match for us. I think he set the stage the right way for us."

Towanda built the lead to 17-0 as Justin Sheets pinned Colin MacWhinnie in 1:13.

At 160 Towanda's Breycin Fulmer almost pulled the upset of the day as he took a 4-2 lead in the third period on regional qualifier Nick Stephani, before Stephani rallied for a 5-4 victory.

"I think the loss at 60 was every bit as good as a win for us," Sexton said. "At that point we were willing to trade weights with them. What we wanted from Fulmer was to keep it to a decision and he did a lot more than that.

"Breycin has worked really hard. He is just getting better every match."

For Fulmer it will help him this year to know he can wrestle with someone like Stephani.

"It's a real confidence booster," he said.

Even with the loss the match brought a lot of energy to the Towanda bench.

"It pumped us up," Wickwire said. "We were all really excited."

It was a close match for two periods with Wickwire holding just a 3-2 lead after two, but Wickwire finished strong to get the bonus point.

"I felt good," Claupein said. "I knew I had to go out and get bonus points."

Sexton knows it's a help having Claupein back in the lineup.

"I think a lot of people forgot about Dalton," Sexton said. "He lettered his sophomore year for us, then he had a bad injury last year that cost him his entire season.

"Early this year he was not the weight he needed coming out of football. He worked hard to get from the high 90s down to 82. I'm really pleased for him."

Troy got a big win at 195 as Briar Jenkins and Towanda's Dakoatah Manning were locked in a 3-3 match late in the third period when Jenkins got a takedown for a 5-3 victory to make it 27-6 Towanda.

The Black Knights extended their lead at 220 as Jeremy Sheets pinned Skyler Drake in 5:04 to make it 33-6.

At 285 Troy's Dylan Brennan and Towanda's Garrett Pratt were locked in a 3-3 match after two periods, before a flurry of activity late in the match left Brennan with a 12-11 victory to make it 33-9.

At 120 Nick Secules wrapped up the match for Towanda, getting three takedowns in the third period on his way to an 11-4 victory over Colin Binford to put Towanda up 36-21 with two weights left.

"With Calkins and Binford we knew that was the strong point of their lineup," Sexton said. "I thought Jared Lines wrestled Calkins good. Calkins is just a really good wrestler. I am pleased with Secules' wrestling. He took it to Binford."

At 126 Troy's Jared Spalding won 7-2 over Towanda's Clay Mosier before the Black Knights' Terrick Vargason won by forfeit at 132.

For Towanda's wrestlers the match was exciting.

"It was a lot of fun, there was great adrenaline going that's for sure," Decker said.

"It was exciting," Wickwire added.

Sexton knows that Friday's match was a big one.

"It's a real big win," he said. "All our key NTL matches are on the road, but I think we are pretty good on the road."

The Black Knights will host a JV Tournament starting at 9 a.m. today. It's a round-robin format and will run until around 2 or 3 p.m. Along with the Black Knights the field will include Northeast Bradford, Tioga, Sayre, Troy, Milton, Warrior Run, Hughesville and Honesdale.