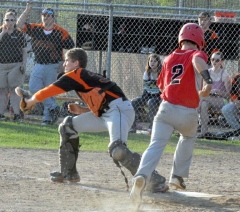 The Warriors, the NTL Division II Champion, had the best record of anyone in either division in the league this year at 12-1 in the league, 18-2 overall.

On Wednesday the Black Knights struck first, getting a run in the first inning as Jared Lines drew a walk and scored on a Nick Place double.

Canton came back in the second inning as Kyle Landis singled and scored on a hit by Tanner Machmer.

The Warriors took the lead in the third as John Bowman singled and scored on a Garrett Wesneski hit.

The game remained 2-1 Canton into the fifth when Towanda's Sawyer Strope singled and scored on a bases loaded walk to Lines.

Canton answered right back in the sixth inning as Tyler Cole reached on an error and scored.

In the seventh Canton scored three runs as Bowman, Trevor Route and Wesneski all scored runs, with the big hit being an RBI triple by Connor Route.

Wesneski struck out two and allowed one hit and three walks, with one run.

For Towanda Ty Johnson started and pitched 2 1/3 innings and struck out one and allowed one walk and four hits, with two runs and Dylan Bates pitched four innings, striking out seven and walked two with three hits and four runs and none earned.

Lines struck out one in 1/3 of an inning for Towanda.

Noah Huff had a hit and a run, Lines had a run and an RBI and Place had a double and two RBI. He was intentionally walked with the bases loaded and two outs in the seventh to score Huff.

"Tonight was an important game, we have been on a pretty good role now," Towanda coach Bill Sexton said. "We had won seven in a row and we were playing the best team in the league tonight and we were playing them even up. We got a good start out of Ty Johnston tonight. We were kind of pitching strapped and we rolled the dice and started him and I thought it worked well for us. Ty pitched well one time through the lineup and he did a nice job and then Bates pitched real well for us.

"Up until two outs in the sixth inning everything was going pretty much the way we wanted it to go and then we pretty much fell apart. We made six errors, five of them in that sixth and seventh inning and we gave the game away. You don't mind when a team outplays you, but when you give a game away it eats at you. That's taking nothing away from Canton. Canton has had an outstanding year and we put ourselves in a position to be competitive with them and we took ourselves out of it."

Sexton was also happy to see Strope come into the game as a pinch hitter and get a big hit.

"I'm pleased with Sawyer Strope," he said. "Strope got hurt last week and we weren't sure we would get him back to do anything and he had a real key hit for us tonight."

Both teams are finished with their regular seasons.

The Redskins drew 14 walks and were hit six times in the game on Wednesday.

Marshall Felt had a hit and three runs and J.P. Harbst and Derrick Keir each scored three runs, while Mike Ward and Jake Goodrich scored two runs each.

Jake Gavitt had two hits and a run for Sullivan and Colton Fry had a hit, a run and a steal, while Stephan MacElhaney had two hits, with a home run, three RBI and a run scored.

Taylor Baldwin had a double and Robert Hoffman and Jordan Pedro scored runs for the Griffins.

The Trojans scored six runs in the fourth to break open a 1-1 game on Wednesday.

Jed Wright was 4-for-4 with three runs and an RBI for Troy and Brandon Mattocks was 3-for-4 with two runs.

Troy's defense turned three double plays, including a play where Reeves dove full out to make a catch in left field and threw to double up a runner at second.

Jackson struck out one, allowed one hit and one run in three innings and Shucker improved to 5-1 on the year with two innings of one hit relief. Morse allowed two hits in two innings.

The Panthers got hits from Bryan Ford, Nik Geiser, Garrett Smith, Hunter Condusta and David Ford in the loss on Wednesday.

David Ford had a home run and Condusta had a double and an RBI.

Matt Learn and Troy Adriance had home runs to lead Williamson to the win on Wednesday.