Jess Hickey gets 50th goal in Sayre win over NEB. 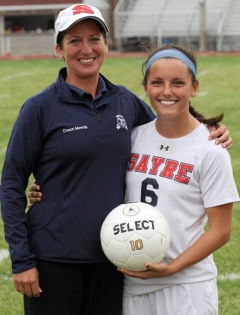 Hickey had four goals in the game and got the mark on her last one with 9:35 left in the second half.

Allie Peet scored the first goal with 23:30 left in the opening half off a Hickey assist.

Then Hickey got back to back goals, the second off a Chloe Tracy assist to make it 3-0 Sayre at the half.

Kirsten Covey scored early in the second half off a Tracy helper followed by Hickey's third goal.

Covey would score again with Northeast getting on the scoreboard at the 11:27 mark of the game off a Hannah Goble goal.

Hickey then got her final and 50th career goal followed by Tracy scoring off a Sydney Post assist to make it an 8-1 final.

NEB's Kira Russell made 16 saves in goal while Paige Wampole had seven stops for Sayre.

Brooke Ward had a hat trick as Troy picked up a win in NTL girls' soccer action Saturday.

Faith Ceeley led off the Trojan scoring at the 10:17 mark of the first half off a Ward assist.

Then at 8:40 Ceeley scored unassisted to make it 2-0 Troy at the half.

Towanda cut it to 2-1 six minutes into the second half as Sierra Casazza scored off a Lauren Risch assist.

That's when Ward started her three goal streak, beginning at 22:09 off an Emma Shedden assist. She then scored at 17:58 and 13:13 off assists from Kaylee Colony and Madison McClelland to make it 6-1.

Towanda's Marin Bovier scored off a Mackenzie Roof helper at 5:26 while the last Troy goal came with 1:47 left to play as Colony scored unassisted.

"Not our finest effort today but Troy is well coached and controlled most of the ball possession, especially in the mid-field," said Knight coach David Jurnack. "I was pleased to see that we never gave up and kept fighting until the end. We had two freshmen score their first varsity goals today which is awesome. We will regroup and hopefully give them a better game later in the season."

Kylie Garris and Megan McGee combined for seven saves for Towanda while Casey Baxter had four saves for Troy.

The highlight of the night was when Brazilian exchange student Ana Gomes scored her first soccer goal ever off a Morgan Ferguson assist in NTL girls' soccer action Saturday.

"She has never played soccer before," remarked Athens coach Duane Hafer. "The whole team was so excited that she was able to score, it was exciting for us."

The Wildcats started off the scoring with two goals inside the first minute.

Mackenzie Warner found the back of the net off a Hannah Reid helper followed by Taylor Conrad scoring unassisted.

Gomes got her goal with 26:16 left to play in the game, followed by Ferguson scoring off a Conrad assist a minute later to make it 6-0.

The Wildcats out shot Williamson and had a 4-2 edge in corner kicks.

Williamson's Sam Herrington had 18 saves in goal for the Warriors.

The Galeton Tigers were rude guests at the Northern Potter Panthers homecoming, beating the Panthers by a 2-1 score.

The Tigers got an own goal when Jon Parsell's corner kick was misdirected into the Northern Potter net by a Panther defender only 2:04 into the contest.

Jake Batterson got credit for the goal.

"Galeton controlled the ball most of the first half with the play of Shuemaker, Emilio Martinez, and Jordan Patterson, while defender Hunter Rachielle seemed to be everywhere thwarting any Panther attack," said Northern Potter coach Mike Morgan.

Northern Potter finally struck in the second half, getting an odd goal of its own. The Panthers were awarded a free kick that Caden Hess shot. The ball bounced around in the 18 yard area and somehow crossed the goal line knotting the score at one.

Galeton's Tyler Dugan scored the game winner with about six minutes remaining in the contest on a pretty give-and-go play with Batterson just inside the Panther 18 yard box.

Galeton out shot Northern Potter 11-4 and had the edge in corner kicks 5-0.

JC Sunderlin had four saves in net for the Tigers while Frank Gardner had eight saves for Northern Potter.

Adam Szklanka and Evan Lewis had two goals each as the Griffins picked up the PHAC boys' soccer win Saturday.

Szklanka started the scoring at 32:26 of the first half off a Lucas Schultz assist.

Muncy tied it up at 23:14 as Derek Sellars scored off a Ryan Ridell helper.

Two late goals by Lewis put Sullivan up 3-1 at the break. He scored with 5:17 left to play off a Szklanka helper, then again with 51 seconds off another Szklanka assist.

Szklanka scored unassisted with 27:30 left in the game followed by Sellars scoring off a Daniel Hall assist at 23:02.

Sullivan out shot Muncy 12-7 while both teams had five corner kicks each.

Sullivan is at Benton Tuesday.