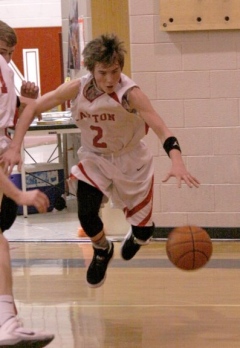 MANSFIELD - The Tigers outscored Sayre 29-15 in the first half on their way to a big NTL win on Friday night.

Mansfield forced a tie with the Redskins in the loss column atop the NTL Division II standings and the Tigers remain unbeaten at home this year, winning their 10th straight on their home court.

"It was a big win because I thought we went up to their gym and we played poorly and they beat us by 12 without Nate (Williams)," Mansfield coach Kipper Burleigh said. "I felt like they were playing good basketball. I watched them beat Muncy and saw them dismantle several teams. Our kids stepped up and played with great enthusiasm and energy."

Bryce Zaparzynski had seven points, five boards and three steals and Jarrod Burd had four points in the win.

Nate Williams, who had averaged over 40 in his past four games, had 23 for Sayre.

"You can't stop him, but we knew where he was and after seeing the box scores he had the last five games, it sounds bad but I was happy with 23," Burleigh said. "I thought we rebounded very well for the first three and a half quarters."

Nick Sweet had 10 for Sayre and Marshall Higley finished with nine, while Cuyler Kochin and Marcos Velazquez had two points each.

Higley had seven boards and Sweet had five rebounds, while Williams had four assists and Murrelle had three assists.

The Crusaders wrapped up the division title on senior night Friday, outscoring Newark Valley 38-11 in the second half of the win.

Tom Agan and Nate Niles each gave up their starting spots for fellow seniors Eric Brennan and Zach Jones in the win, with Brennan scoring four and Jones scoring three.

"That's certainly part of the package to be able to do that," Notre Dame coach Bill Hopkins said of winning the division title. "We were able to start Zach Jones and Eric Brennan due to the kind act of Tom Agan and Nate Niles that both bowed out of their starting spots to let the two start a game in their careers. It's pretty classy to be able to acknowledge a teammate rather than thinking about themselves, especially in a me-me-me world."

Darius Garvin led Notre Dame with 22 points and six steals and Agan had a double-double with 12 points and 11 boards, while Derek Marshall had 11 boards, six assists and one point.

Jonas McCaig had eight points, Niles had seven and Hunter Thomas added three in the win.

Notre Dame is at Spencer Van-Etten on Tuesday.

ATHENS - The Black Knights outscored Athens 23-13 in the second quarter on their way to the win.

Noah Huff scored 17 for the Black Knights as nine Towanda players and 10 Athens players scored in the game.

David Rodenhizer had 10 for Towanda and Nick Place and Noah Wheeler each had eight, while Bailey Potter finished with six.

Dylan Bates and Garrett Mosier had four each for the Black Knights and Tristan James had two, while Mitchell Jenkins finished with one point.

Austin Lister and Fred Horn had two each for Athens and Kalen Keathley chipped in with one point.

Priester had three assists and two steals and Horn had four boards.

"Congrats to Towanda, they have a nice team," Athens coach Cody White said. "I thought the guys that came off the bench gave us solid minutes and really hustled their butts off. It came down to them wanting it more than us."

Athens won the JV game 65-21 with Aaron Berry scoring 18 for Athens and Nick Innocenzo getting seven for Towanda.

WELLSBORO - Dylan Prough led four Green Hornets players in double figures with 18 as they rolled to the win on Friday night.

Wellsboro jumped out to a 22-7 lead after one quarter on their way to the win.

Along with the 18 from Prough the Green Hornets got 15 from Michael Pietropola and 12 from Kieron Smethers, while Joey Doganiero added 10 points.

Dawson Prough had seven, Jake Mitchell had a career-high six and Brandon Lamphier had three, while Nick Marple had two.

Smethers had 13 rebounds and three assists, with four steals and Dylan Prough had three blocks, tow assists and seven boards.

Dawson Prough had five boards and four assists and Doganiero had four boards and two assists.

Marple had six rebounds and Mitchell had four boards.

Troy was led by Evan Polly with 13 and Brandon Mattocks had nine, while Ryan Reeves added eight.

Jed Wright had six for the Trojans and Jared Murray had three, while Gage Burns added two.

CANTON - Jordan Goodwin had 24 points and 17 boards, with three blocks, to lead the Panthers to the win.

Northeast outscored the Warriors 30-12 in the first half of the win.

Andy Seeley and Levi Upham each had seven points and Seeley added 12 boards, while Upham had 10 rebounds and five assists.

Canton got 21 from Mason Moore and Kerry Moon and Jesse Lattimer had seven each.

Christian Thoren had six for Canton and Tre Sautell had five, while Chris Whitehead and Ridge Moore had two points apiece.

NEB won the JV game 43-18. Senn-Bishop had 16 and Jeremiah Clinton had seven for Canton.

The Panthers host CV on Tuesday.

Kaynen Arredondo had a double-double with 12 points, 10 boards and he blocked six shots to lead North Penn to the win.

The Panthers led by just two at the half, but outscored Liberty 18-7 in the third.

Dayton Wood and Cody Crum each had 11 for North Penn and Dylan Rudinski and Brad Brubaker finished with six points each.

Liberty was led by Cody Schmouder with 19 and Kenny Kreger had nine.

J.J. Walker and Dalton Litzelman each had six for Liberty and Sergey June had three points.

Williamson got 16 from Troy Adriance and 14 from Kyle Haight in the win.

Josh Bradbury had 10 for the Warriors and Nick Cevette finished with six points.

Keshon Gardner had eight for the Rams and Collin Fassett had six, while Terron Millard and Dylan Bulick finished with three each.

Devon Carr and Ridge Williams each chipped in with two and Jordan Schools had one point.

WAVERLY, N.Y. - Alex Uhl had a career-high 27 points to lead the Wolverines to the victory.

Waverly outscored Windsor 21-10 in the second quarter after trailing 9-6 after one.

Uhl added seven boards and four steals and Dylan Perry had 12 in the win, with three assists.

Colton Miller, Garrett Sutryk, Tim Sutton and Ryan McFarland had four each for Waverly, with McFarland and Sutryk each getting seven boards.

Hunter Bodine had three for Waverly and Tanner Cantrell and Peyton Miller both finished with two points.

Waverly won the JV game 52-47 with Zach VanHouten scoring 17 and John Ward getting 12.

Waverly is at O-M on Tuesday.

The Crusaders got 16 points from Sheridan Heine and 10 from Mia Herlan in the victory.

Emily Carson had nine for Notre Dame and Kaylyn Curran had four, while Ariana Bulkley finished with three.

Mackenzie Maloney, Megan O'Dell, Mary Foster and Megan Herrick had two points each and Ramona Sonner-Myers chipped in with one point in the win.