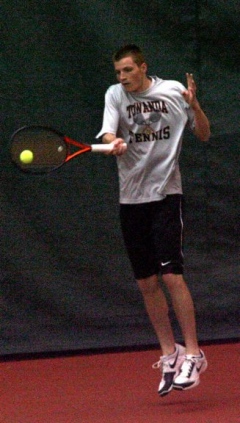 SOUTH WILLIAMSPORT - All season long Towanda's Dave Rodenhizer has been dominant on the tennis court.

Going into the District IV singles semi-finals Monday not only had Rodenhizer not lost a match this season, he had only lost one set.

That dominance continued on Monday as Rodenhizer claimed the District IV title in four straight sets between the day's two matches.

"It feels pretty surreal," he remarked. "I had high expectations to win the final."

He beat South Williamsport's Christian Cioffi 6-0, 6-3 to claim the championship.

"Christian was a heck of a match for me," Rodenhizer said. "I'm glad I was champion and I'm pretty excited to move on to states."

Last year the Black Knight senior came up short in the District IV final but wanted to make sure that didn't happen this year.

"I almost has a chance to win that match," explained Rodenhizer. "I had a very competitive edge coming into this match, I really wanted to grind it out. I definitely didn't want the same result as last time, I was looking for that gold."

It helped Rodenhizer that he finished his semi-final match in under an hour while the Cioffi/Dillman match went two hours and 20 minutes.

"I have some time to see what these guys do," he said. "And get a little bit of rest."

Having faced Cioffi before Rodenhizer knew it wasn't going to be an easy match so he got good practice in to prepare.

"I knew Christian was going to come out swinging," he said. "A week prior to this I was hitting with some hard hitters, really focusing on being aggressive. With a 6-0 win in the first set I was really focused on leaving it all out on the court. I'm glad it paid off."

Now Rodenhizer will be focused on making a run at the PIAA title which will be on Friday, May 23 at the Hershey Racquet Club.

"I'm going to be practicing a lot with a lot of good hitters," he explained. "And my team, I will be hitting with them the next few weeks as they have to get ready for district doubles. I also plan to meet up with Christian later on and hit with him before states."

In the semi-final Rodenhizer defeated Galeton's Tyler Dugan 6-2, 6-0 while on the other side of the bracket Cioffi fought off Wellsboro's Aaron Dillman 6-2, 7-6 (7-4).

Early on it was the youngster Dugan jumping out to a lead. Rodenhizer won the first game to go up 1-0 but Dugan took the next two to take a 2-1 lead.

"I got up early and I thought my momentum might keep it rolling," said Dugan.

"It takes some getting used to," Rodenhizer explained about playing indoors. "Really I just need to work through adversity. I had a little bit of nerves coming into it but I just had to play tennis and get out of it."

At that point, though, is when Rodenhizer got rolling. And he didn't stop.

The senior went on to win the next 11 games to take the match.

"That second set I really just tried to hit good shots, hit lines and focus on my game instead of everything that was going on," said Rodenhizer. "I really concentrated and did what I had to do."

That win secured his spot at states.

"It feels great," Rodenhizer said about securing his place at states. "That was one of my goals coming into this year, I went last year. I knew I had to work hard to get back to states. I'm pretty happy and I'm looking forward to it."

Despite the loss, Dugan was excited to make it to the semi-finals and play at the West Branch Tennis Club.

"It was awesome," he said. "I worked hard and it paid off. It was just really cool to make it this far for the experience."

The sophomore hopes to be back next year.

"It gave me really good experience," he said.

The other semi-final match was a little tighter.

Dillman and Cioffi was a match-up between the second and third seeds.

The first set began back and forth with Cioffi taking a 3-2 lead.

He then won the next three matches to take the set but it was closer than the 6-2 score indicated as Dillman made him work for each game.

"I thought I performed below where I should have," explained Dillman. "Going into the next set I tried to make up for it."

Then in the second set it was Dillman's turn.

But Cioffi battled back. He began attacking the net more and it paid off as he would rally back and knot the match up at 4-all.

The two continued to trade games and forced a tie-breaker when they tied at 6-6.

Dillman took a 4-2 lead in the tie-breaker but Cioffi had one more push left and came back to win 7-4 and take the set 7-6 to earn a state berth and reach the finals.

Despite his second setback in a row, Dillman was happy to reach the semi-finals two years in a row.

"It's a great experience," he said. "I really like coming back. I was hoping for a better result."

This year was not just big for Towanda but for the whole NTL since it was the first time they had three singles players reach the semi-finals.

"It's incredible," remarked Dillman. "I love seeing tennis in the Northern Tier, I'm happy that it's doing well and I hope it continues."

"It shows how we can play good up there," added Dugan. "We have a lot of players coming up, too."