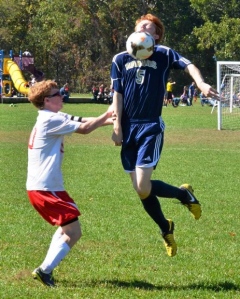 Matt Dodson scored the first Williamson goal at 38:39 of the first half off a Matt Learn assist.

Then with 6:38 left to play Dodson scored again, this time off a Nate Styles helper.

Jon Daley scored the second half goal for the Warriors off a Colin Heilbrun assist.

Williamson outshot Troy 9-8 and had a 4-3 edge in corner kicks.

Trevor Ward made eight saves in goal for Troy.

An Aaron Pifer goal under three minutes into overtime proved to be the difference in the NTL boys' soccer contest Saturday.

Pifer led off the scoring with 3:31 left in the first half off a through ball from Elijah Arias.

Sayre tied it up at 1-1 early in the second half as Matt Williams scored off a direct kick.

Then with 7:34 left in the first overtime Pifer got a long ball from Troy Brown and cut through the Sayre defense to get the win.

"Our boys just seem to get better every game," said NEB coach Dan Martin. "They passed the ball around, ran through it very aggresively, it was just an excellent job. We were able to finish. We've struggled with finishing all year, it's important to convert opportunities."

Northeast out shot Sayre 11-9 and had more corner kicks 5-2.

Mason Merrill made six saves for the Panthers while Marshall Higley had five for Sayre.

The Tigers got a homecoming win over the Hornets in NTL boys' soccer action Saturday.

"It was a great win," Galeton coach Jim Sunderlin remarked.

Chad Shuemaker put the Tigers ahead with a penalty kick with 9:28 left in the first half.

Then with 32:39 left in the game Wellsboro's Josiah Hill tied it up but that's when Galeton got their offense going.

Shortly after Tyler Dugan put the Tigers back on top off a Jake Batterson assist.

Batterson would find the back of the net with 1:46 left in the game off an Emilio Martinez assist to make it 4-1.

Wellsboro's Briuex Thibeult scored with 1:08 left to play to make it a 4-2 final.

Galeton had the edge in shots 7-6 while they each had two corner kicks.

JC Sunderlin made four saves for Galeton while Jake Mitchell had three saves for Wellsboro.

The Tigers travel to Towanda Monday.

The Wildcats picked up an NTL boys' soccer win Saturday.

It was the Panthers who struck first as Jeremy Butler scored off a Tyler Cowburn assist less than five minutes into the game.

Then 40 seconds later at 35:03 Jarrett Priester answered for Athens off a Ryan Segar helpre.

Then with 20:41 left in the opening half Ethan Lane gave the Wildcats the lead off a Gavin Stein assist.

Shane Colegrove put it away for the Wildcats with 5:47 left to play in the game off a Priester assist.

Athens out shot Northern Potter 17-2 while both teams had three corner kicks each.

Frank Gardner had 14 saves for NoPo while Nick Vosburg made one stop for Athens.

The Wildcats host Wellsboro in a key NTL showdown Monday.

Tice started the scoring 9:23 into the game directly off a corner kick.

Then at 10:59 Liberty's Richard Cady scored off a Jonah Paulhamus assist to make it 2-0.

Tice got his second goal unassisted at 20:40 followed by Paulhamus making it 4-0 with eight minutes to go in the opening half.

Then at the 54:52 mark of the game Towanda's Tyler Basse scored to get the Knights on the scoreboard.

Liberty out shot Towanda 8-1 and had the edge in corner kicks 6-2.

The Mountaineers travel to Williamson Monday.

The Wolverines got two goals from Kylie Newman as they picked up an IAC cross-over win Saturday.

Danielle Burkhart led off the scoring at the 28th minute followed by Elle Nittinger making it 2-0 at the break.

Then in the second half Newman scored back to back goals, the first off a Capria Pico assist while the second came off a Nittinger helper.

"I thought we played pretty well considering having played last night and then right back at it the next morning," said Waverly coach Brian Myers. "Legs were a little heavy but the girls did a great job battling through it and getting the job done. I continue to see progression with the team through each competition."

Waverly out shot Moravia 27-4 and had three corner kicks.

Zoe Mennig made four saves in goal for the Wolverines.

It was a wild finish for the Wildcats that saw them go from tying the game up late in the second half to watching Montoursville score four goals in the final 15 minutes to secure the non-league girls' soccer win Saturday.

Kirsten O'Malley scored with 10:12 left in the first half to put the Warriors up 1-0 at the break.

Then at the 18 minute mark Athens freshman Taylor Renard appeared to score the equalizer but the goal was called back as the official said Renard had run over the defender to get the goal.

"I was pleased with the aggressive play from Taylor Renard," said Wildcat coach Duane Hafer.

The veteran coach was confused with the call.

"They both hit together when they both got to the ball," Hafer remarked.

With new life O'Malley struck again for Montoursville with 14 minutes left to play off a rebound from a Morgan Westbrook save.

Then at 10:06 O'Malley got the hat trick off an Alexis Marchioni assist.

Late goals by Gillian Mitchell and Maddy Gorini made it a 5-0 final.

The Warriors out shot Athens 27-2 and had a 16-2 edge in corner kicks, most of which came in the final flurry.

Morgan Westbrook had 20 saves for Athens.

Montoursville won the JV game 1-0 off a Tatia Kraft goal.

The Wildcats travel to Wellsboro Tuesday.