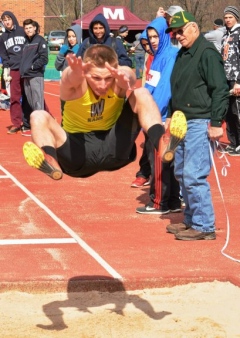 WYALUSING - It was a big day for locals at the Wyalusing Lasagna Invite on Friday.

"I felt good, the past two invitationals I went up against Bragalone and second place is humbling," Keathley said.

The wind had a factor in the race for Keathley and the other runners.

"You get up to max speed faster with the wind, it's different being up to max early in the race. Everyone else was fast and that really pushed me. This will help me going into NTL and districts."

For the Athens sophomore it's fun to go up against different competition.

"I really like to race against different people," he said.

"It feels great," Gambrell said after winning the long jump. "It's a great accomplishment for me."

Gambrell only took one jump in the prelims, before heading to the 100 final, and it took until her second jump in the finals to break 17-feet, but her best two jumps were her last two.

"I was not expecting that," Gambrell said of taking just one preliminary jump. "It's great to see that I am progressing throughout my jumps."

While the 100 was the one race she didn't win, Gambrell got a personal best time in the race.

"A PR is always great," she said. "Competition is great. I love it. It makes you do your best."

Northeast Bradford took three of the top four spots in the discus.

Wyalusing's Warner Mendoza was sixth at 126-feet, 6-inches and Layton Calkins of Troy was eighth at 120-feet, 10-inches.

Smith led most of the race before Lakeland's Nathan Morgan caught him and won in 4:28.41.

Running in a strong wind made the race tough for Smith.

"The wind was brutal, especially the last lap," he said.

Smith went out early and raced from the front of the pack all race.

"I wanted to set the pace, get out in front and try and get a good time," Smith said.

With the wind in his face and no one in front of him to block the wind it made things tough for the Towanda senior.

"Maybe it would have been better if I had sat back," Smith said. "But, I wanted to set the pace. I want to go home and think about the last 600 and what I can do to finish stronger."

Racing against kids he doesn't normally see is something that Smith enjoys.

"It's definitely nice," he said. "The only time I see some of these people is at states, so it's great."

Athens' Tyler Solomon was fourth in the pole vault at 11-feet, with Frederick fifth at the same height. Coleton Gerrity of Towanda was eighth at 10-feet, 6-inches.

In the girls' pole vault Towanda's Kayla Brown was sixth at 8-feet, followed by teammate Tama at 7-feet, 6-inches.

Sayre's Joey Galizia was third in the long jump at 20-feet, 5-inches and Wyalusing's Ethan Ace was seventh at 19-feet, 2 ½-inches.

Wyalusing's Terron Millard was eighth in the high jump at 5-feet, 6-inches.

Joey Brown took second in the pole vault at 10-feet while Jeremiah Whalen was fourth in the discus at 110-feet, 9-inches.

On the girls' side Williamson was 11th with 19 points.

Sierra Gehringer was third in the pole vault at 7-feet, 6-inches while Destinee Wanner was sixth in the 300 hurdles at 59.04.