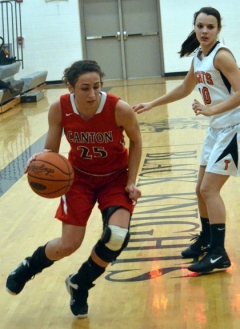 Wyalusing trailed after each of the first three quarters, but a big fourth quarter helped the Rams top Northeast Bradford 68-60 to stay unbeaten in NTL play.

"Hats off to the seniors, they played tremendous in the second half," Wyalusing coach Jon Schulze said of his team.

Roni Morrison led the Rams with a season-high 22 points and she had six boards, three assists and two blocked shots in the win.

Kasey DeVoir had 13 points, four boards and three blocks and Paighton Martin had 12 points and five boards, with four assists and three steals.

Northeast Bradford was led by Maddy Johnson with 17 points and Lydia Werner had 16 in the game.

Macy Wilks had 11 points for the Panthers and Kara Hallett had 10 points, while Megan Brown had six.

Wyalusing is at Troy at 6 p.m., varsity only, on Thursday.

TOWANDA - The Black Knights got a career-high 10 points from Megan Paulish and Ali Daum also had 10 points in the victory on Tuesday night.

Down 22-14 at the half, Canton fought back in the second half, but Towanda was able to hang on for the win.

Kylie Roof, Kayla Grimes and Kendra Abrams had two points each and Kinslee Kriner finished with one point.

Daum had nine boards, Grimes had seven boards and Kriner had six boards, while Koss had three steals.

Canton was led by Lizzy Tymeson with 17 points and Abby Herman had seven points.

Emalie Marnati had six for Canton and Alexa Roy had five, while Gabby Tymeson finished with three points.

Towanda won the JV game 29-8. Cassidy Walker had nine for Towanda and Olura Baldwin had three for Canton.

Towanda is at Mansfield on Thursday.

Playing without second-leading scorer Faith Ceely, the Trojans got 19 points from Kelsey Bristol and a double-double from Taylor Johnston in the win.

Brooke Mattocks had nine points and four assists for Troy and Kristyn Kinner had four points, 10 boards and three steals.

Brittany Boyce had 15 points and Makayla Butz 14 points for Williamson.

Logan Wilson, Andrea Sheive and Danielle Cross had four each for Williamson and Maran Davis had two points.

The Green Hornets got a career-high 28 points from Sarah Ingerick and a career-high 12 from Lizzie Poirier in the win on Tuesday.

Jordan Butters and Rachael Tuttle had seven points each and Janessa Davis finished with four points each.

Autumn Kitajuima had three points for Wellsboro and Jessica Grab and Alexa Singer had two each.

Tuttle had 19 boards and Ingerick had 16, while Butters had nine boards and Grab had eight boards. Peyton Wilson and Davis had two steals each, Singer had four assists and Wilson had two assists.

Alyssa Remley had six for Liberty and Erin Shaffer, Emma Heyd and Abby Williams had two points each.

Wellsboro JV won 51-13. Alyssa Yungwirth had 16 and Poirier had 12 for Wellsboro.

Kristina Buchanan had 13 for Mansfield and Alysa Davey-Bostic had 12 points.

Kaitlyn Garverick had nine points and Avery Montefusco and Ali Hillson had seven each.

Sara Wolbert had four points for Mansfield and Lauren Smith had one point.

Garverick had nine boards and three assists, with eight steals.

Hillson had 10 steals and eight assists and Davey-Bostic had six steals and Berguson had five boards and three assists.

Amaya Walker, Paige Swartz and Whitney Earl had six each for CV.

Sierra Gehringer, Becky Plummer and Nicole Hummel had two points each for CV.

The Wolverines got 12 points from Elle Nittinger and 10 from Emiley Myers in the win on Tuesday night.

Kiana Manuel had seven points for the Wolverines and Kylie Newman and Alex Tomasso had six each.

Breanna Featherson and Katie McEvoy each had three points for Waverly.

Notre Dame was led by Ariana Bulkley with 12 points and Sarah Watts finished with nine points.

Mia Herlan had six for the Crusaders and Mary Foster had four points, while Mackenzie Mahajan finished with two points.

Notre Dame is at Edison on Friday and Waverly hosts Watkins Glen.

The Tigers trailed 19-5 after one quarter and weren't able to fully recover in the loss Tuesday.

Katelyn Stubbs had a double-double with 12 points and 12 boards, with two steals and two assists and Kaitlyn Burridge had 10 points and eight boards for Tioga.

Dani Barto and Kierstin Schweiger had eight points each for Tioga and Taylor Ayres had five points, while Madi Teribury finished with two points.