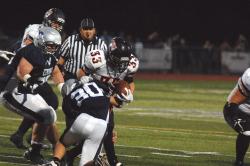 Central Columbia racked up 526 total yards as they picked up the win over Towanda on Friday 48-0.

Aaron Farver was 10-for-15 passing for 251 yards for Central with two touchdowns and Jensen Thiverge had 157 yards on four catches with a pair of scores.

Isaac Gensemer started things for Central with 10:29 left in the first quarter on a five-yard run with Garrett Barilar hitting the extra point.

Thiverge hauled in a 29-yard touchdown from Farver with 47 seconds left in the quarter and Barilar hit the extra point.

Towanda had a chance to score, but Central got an interception in the end zone and Gensemer scored on a 10-yard run with 1:12 left in the half and Barilar made the kick to make it 21-0.

Gensemer scored his third touchdown with 7:30 left in the third on a four-yard run and Barilar hit the extra point.

Thiverge caught a 72-yard touchdown from Farver with :58 seconds left in the quarter and the extra point failed to make it 34-0.

Dalton Potter threw for 17 yards in the game. With some injuries the Black Knights saw a lot of younger players get some playing time, including freshman Tanner Kunkle getting some time at quarterback.

Keegan Kisner ran for 123 yards on 20 carries for the Black Knights and Potter had 51 yards rushing. Jyashire Robinson had nine carries for 12 yards in the game.

Gensemer had 166 yards and three scores for Bloomsburg.

Joe Koss, Isaac Pelka and Luke Tama had catches for Towanda in the game.