Wellsboro pulls away in second half to top Sayre - 2016 NTL and District 4 News - WellsboroAthletics.com

Wellsboro pulls away in second half to top Sayre. 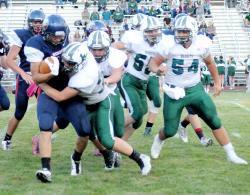 SAYRE — Sayre managed to keep up the momentum against Wellsboro for the majority of their matchup.

However, late in the second half, the Hornets buzzed past the Redskins.

With 21 points from Wellsboro after two minutes in the third quarter and beyond, Sayre fell victim to a 28-0 Friday night at the Lockhart Street Bowl.

"They played their hearts out tonight," said Sayre coach Steve Satterly. "I can't ask for a better group. These guys played so hard and they're great kids."

It was certainly an uncontrollable factor for Sayre trying to keep Wellsboro in check down the stretch in the second half.

"We hung with (Wellsboro) in the first half, but in the second half they made more plays than we did," said Satterly. "I can't knock their effort tonight. They did an awesome job."

Wellsboro coach Matt Hildebrand, on the other hand, saw lack of focus from his players, which worked in Sayre's favor for the most part.

"The last two weeks we've played a little tight so we have to find a way to go faster," said Hildebrand. "I don't know what it is, but we got be ready to play from the very first possession. We're going to get caught at one of these points so we'll have to work on avoiding slow starts."

Of course, Satterly knew what his team was going up against. However, he knew it was tough for the Redskins to match the Hornets intensity.

"Wellsboro is one of the better teams in the league and for a good amount of time we were stride-to-stride with them," said Satterly. "Unfortunately, they made more plays than we did."

Satterly even predicted a tough go at the beginning of their regular season schedule before the season began. With that, he knew keeping his players spirits up was as important as any play call.

"We had really two hard fought games in a row," said Satterly. "The emotions of the game puts things into perspective. They're kids. They are going to make mistakes. It's up to us as coaches to fix those mistakes, keep them upbeat and positive."

Despite the Redskins struggling to find the end zone, they garnered an efficient effort from Tylor Belles. The senior tail back rushed for 119 yards on 24 carries, with 75 of those yards coming in the first half.

"Tylor ran really well tonight," said Satterly. "The offensive line blocked well for him, giving him chances to make a few moves on the ground."

The Hornets' second possession of the game proved to be the ticket for their first score of the game.

With third and seven midway through the first quarter on Wellsboro's 42-yard line, quarterback Brandon Lamphier connected with Dalton Prough for a 58-yard touchdown to make it 7-0.

Heading into the second quarter, the Redskins got into Hornets territory at the 32-yard line but couldn't convert on a third and 13, resulting in a Belles punt.

The Redskins kept the Hornets off the scoreboard until the final minutes of the third quarter. Lamphier found Hauser for a 15-yard pass, putting Wellsboro up 14-0.

Later in the game, Lamphier threw a screen pass to Hauser, but Hauser fumbled the catch and put the ball out of reach. As a result, Sayre recovered the fumble to set up shop at the 50-yard line.

Belles ziplined for a 15-yard gain on the ground to put Sayre close at the 32-yard line. The scoring attempt fell short as John Esposito was intercepted by Alex Kuzuhowski and added fuel to fire with a 53-yard return.

Suddenly, Sayre came right back with a pick, as Gage Carnrike intercepted Lamphier. Two plays later, the Redskins gave it right back.

Esposito threw up the middle into two-man coverage, resulting in Chase Moser taking it to the house for a 20-yard pick six. With that, Wellsboro went up 21-0.

Lamphier put the icing on the cake for the Hornets with a 26-yard touchdown run to increase their lead to four touchdowns.

From here on out, Satterly is hoping to work out the kinks.

"We got to get the kids healthy. A few are banged up, but that's football," said Satterly. "We have to work on some stuff but we'll be ready for the next eight weeks."

Sayre will hit the road to Montgomery next Friday. Game time is set for 7 p.m.