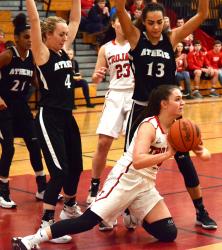 TROY — Athens stayed undefeated in the NTL Tuesday, but it wasn't easy.

The Wildcats were down 16-12 after the first quarter, but managed to claw their way to a 49-41 Division-I girls' basketball win.

Athens led 25-24 at the half before out scoring Troy 18-6 in the third quarter to pull ahead. Troy rallied in the fourth, out scoring Athens 17-6, but couldn't get over the hump.

Gambrell and Chapman both had four rebounds as well.

Sam Gentile was injured in the second quarter and didn't return.

"We came up short in a hard-fought game against Athens," Troy coach Brian Burchard said. "We battled tough through an injury and foul trouble. I'm so proud of these Lady Trojans."

Troy is at Wyalusing on Thursday.

The Redskins captured the NTL Division II title on Tuesday with the victory.

"Very proud to be coach of this team," Sayre coach Eileen Sparduti said. "Another great team win on the road. And another clinch of a Division II title. 27 bench points is a solid night of ball distribution for us. After a slow start, our defense fueled our scoring to pull away convincingly before half time. We are looking forward to celebrating our accomplishments with our home fans and appreciate the loyal band on hand tonight out on the road."

Kaeli Sutryk led Sayre with 15 points and Chloe Tracy had 11.

Camry Lane and Madi Wheeler had eight points for Sayre. It was a career high for Wheeler.

Ball had six boards and four steals and Tracy had eight assists and two steals, with two boards.

Michaela Schmouder had six points for Liberty and Alyssa Remley, Emma Williams and Marissa Harer had two points each.

Down 16-11 after the first quarter the Panthers out scored Williamson 39-24 the rest of the way for the NTL Division-II girls' basketball win Tuesday.

Madelyn Edsell and Emily Champluvier combined for 27 points as the Rams picked up an NTL Division-I girls' basketball win Tuesday.

Ali Daum and Megan Paulish had nine points each to lead the Lady Knights while Courtney Bennett and Cearra McLinko added three points a piece.

CV jumped out to a 9-6 first quarter lead and never looked back as they picked up an NTL girls' basketball win Tuesday.

Janessa Davis had a career high 18 points as the Hornets picked up the NTL Division-I girls' basketball win Tuesday.

Brittany Weiskopff had three points, JoAnne McNamara and Sara Swingle had two points a piece while Miranda Hampsher and Elli Fry had one point each.