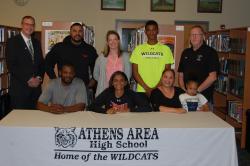 Unlike most college signees, Baglini chose Mansfield before ever actually visiting the campus.

"I've never really gotten a chance to actually visit the campus," said Baglini. "Besides go for track meets and play there for like NTL Championships but I never really got to visit it. Once I visited it, it literally felt like home.

"Of course I get to play with Morgan (Westbrook) for another four years," said Baglini. "So that's another reason I chose it. I also think it would be a very good program and I love the coaches."

Baglini played two games on the court at Decker Gymnasium this year, the NTL Championship game and the NTL Senior game. Both times Baglini's teams were the victors.

"Yeah, I had a good game that night (NTL Championship game)," noted the senior. "I actually met the coach when we had our senior night game so once I first met him it kind of sealed the deal, too."

Baglini's basketball career got off to a bit of rough start but now it's right on track.

"I never really visualized myself playing college ball," said Baglini. "I think I started playing basketball when I was in fourth grade and I was afraid to touch the court. Every game I was probably under Morgan's mom's arms crying or crying to my dad because I was just scared of the girls, they were bigger than me. Then once my dad started coaching I started joining AAU teams and throughout those years I just started pushing myself and my love for basketball started to grow more."

Now that she is entering collegiate play, Baglini knows she will have to step up her game in order to get playing time.

"Since it's Division II basketball, I know I'm going to have to play up more of a level," noted the senior. "I know these next few year I'm going to have to work my butt off, there's no doubt in it. There's some things I see myself struggling in and facing throughout the years but it's all going to be a learning experience and my time to develop."

Since Baglini is a multi-sport athlete at Athens, she's been able to stay in shape. Baglini's track season isn't over yet, however, so she hasn't been able to work on her basketball skills.

"Since I'm still in track season, I can't really touch a ball because my coaches will kill me," laughed Baglini. "After the track season is over and once I graduate, I get my workout packet and Morgan and I be working on that."

Aside from what her future coached want her working on, Baglini sees some aspects of her game she will need to improve on.

"Personally, my shooting and my left hand — definitely my left hand," laughed the senior.