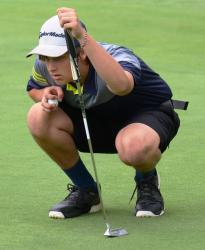 WESTFIELD — Playing on their home course of River Valley, the Cowanesque Valley golf team posted the low round of the day with a 322 to take first place in an NTL match.

Tanner Adriance paced CV with medalist honors of a 70, and Austin Outman tied for the second best round at 76. Tyler Vargeson shot 87 and Kurtis Easton shot 89, while Christian Kemp had a 95 and Joel Heck had a 98 in non-scoring rounds. Skylar Smith shot 45 and Josh Whalen 54 in nine-hole exhibition rounds.

Wellsboro was second at 344 with Ben Barnett leading the way at 78. Taynton Reppard shot 86 and Brandyn Tuttle shot 87, while Joseph Propheta shot a 93. Ty Morral had a 94 and Brock Hamblin had a 97 in non-scoring rounds. Ethan Blakley had a 59 and Daniel Mitchell a 50 in exhibition rounds.

NP-Mansfield was fourth at 399 with Andrew Everetts leading the way with a 96. Curtis Craig shot 100, RJ Farrell shot 101 and Reece White had a round of 102. Katrina Toth-Penner shot 105 and Ethan Weiskopff had a 115 in non-scoring rounds. Alex Stein shot a 65 in an exhibition round.

Anthony Peterson shot a 116 and Kyler Setzer a 135 in non-scoring rounds. Brady Smith had a 50 in an exhibition round.

"We knew going to River Valley and beating CV was going to be tough," Wellsboro coach Steve Macensky said. "On the bright side, we posted another good team score of 344. Which, was the winning team score at districts last year. Also, for the first time since I started coaching, we had all six players break 100. It was a positive night all the way around."