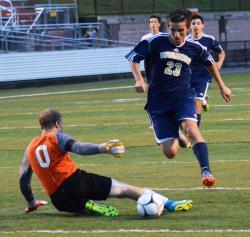 TOWANDA — The Fish brothers scored four of nine goals to lead Williamson to a 9-0 win over Towanda in NTL boys’ soccer action Thursday.

Both brothers had two goals in the game.

Andrew Learn had a goal and an assist while Sam Cummings, Matt Drake, Mycha Grist and Ethan Shaefer also scored.

The Warriors out shot Towanda 16-5 and had a 4-2 edge in corner kicks.

Jared McNeal had seven saves for the Knights while Justin Robbins had five saves for Williamson.

The Wildcats scored 11 second-half goals in the win.

Ethan Lane started things for Athens at 26:50 of the first half off a David Sheftic assist and Willey Tilley scored at 24:52 off a Nathan Aquilio assist.

Sheftic scored at 19:33 off a Brad Cardona assist and Doug Vosburg scored at 5:17.

NPL got a goal at 29:42 of the second half as Luke Yoder scored off a Nathaniel Johnson assist.

Sheftic scored at 29:17 off a Jon Dailey assist and Gavin Stein scored at 25:36 off a Sheftic assist.

Aquilio scored at 2:56 and Tilley scored with 56 seconds left off a Zach Anderson assist.

Athens had 28 shots and eight corners and NPL had one shot and one corner. Braden Priester had one save for Athens and Riley Walker had 12 saves for NPL.

Isaiah Shuemaker had both goals for Galeton in the game.

Both Galeton goals came in the first half as they led 2-0 at the break.

Maxon Cooper scored with 26 minutes left for NEB off a Ben Alderson assist.

Galeton had 18 shots and five corners and NEB had 16 shots and four corners. Brandon Ruef had 10 saves for Galeton and Adam Cole had 13 for NEB.

The Green Hornets scored eight first-half goals in the win.

Tanner Runyan started things off a Gabe Leach assist at 4:19 and at 11:48 Kaeden Mann set up Leach for a goal.

Wellsboro had 48 shots and nine corners and Sayre had six shots and no corners.

Ezra Sprow started things for Northern Potter off a Foster Kosa assist 34 minutes in and at 39:12 it was Ricky Kunselman who scored off an assist from Ryan Langworth.