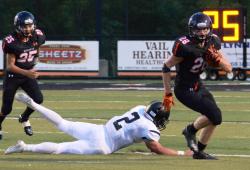 TOWANDA — Every time Zane Neubert touched the ball in the second half he refused to go down.

The Towanda junior bounced off tacklers, stiff-armed defenders and ran right through the Mahanoy defense, racking up 283 yards and three touchdowns on 19 carries in his first start as the lead tailback to lead Towanda to a 28-21 comeback win.

"It feels pretty good," Neubert said. "We were down at the half, but we came back. We had great blocking by the line, wide receivers, everybody. It's all thanks to my linemen and everybody blocking for me."

For Neubert the performance on Friday came as a surprise.

"I think I surprised myself."

The junior's night was punctuated with 35 seconds left when he broke four tackles on his way to a 31-yard, game-winning touchdown run.

"I didn't believe it," Neubert said of the run. "I felt like I was flying."

Down 14-0 at the half, Towanda scored 21 fourth-quarter points in the win.

"It was great," Towanda coach Craig Dawsey said. "We moved the ball in the first half, we did a lot of great things. I told Ryan (offensive coordinator Ryan Larcom) to keep doing what you are doing. I think Dan Cook, coming in and taking over for a legend (Jamie Wecker), there was a lot of pressure on Dan and Dan did a great job. The coaches stuck to the game plan and the players believed. It was a great win. I told the kids, I don't know if I ever have had a first game win like this."

Mahanoy struck first as Matthew Lewandowski ran a keeper on the option and took off for a 44-yard touchdown just 2:02 into the game. Logan VanHorn hit the extra point and it was 7-0.

With just 59 seconds left in the half Lewandowski threw a 22-yard touchdown to Danny Lawrence and VanHorn hit the kick and it was 14-0 at the half.

In the second half the Towanda defense really put the clamps down and put Mahanoy into long-yardage situations, slowing their option attack.

"That's what we tried to do the whole game," Dawsey said. "I think we just got stronger as the game went on. They may have gotten a little tired, and our kids just put the pedal to the metal. It was great to see."

Neubert ran three times for 47 yards on Towanda's opening drive of the second half, and capped the drive with a 6-yard run with 9:24 left in the third. The extra point failed and it was 14-6 Mahanoy.

After a Luke Tama interception gave the Black Knights the ball, Towanda tied things with 11:52 left in the fourth quarter as Tanner Kunkle hit Isaac Pelka on a 17-yard touchdown, with Pelka leaping out of the reach of a defender to cross the goal line. Kunkle hit Dalton Potter on the two-point try and the game was tied at 14.

Mahanoy came right back with a drive of their own, capped off by a 10-yard Lewandowski run with 7:15 left. VanHorn hit the kick and Mahanoy went back on top 21-14.

That's when Neubert took over for Towanda, as he broke a 78-yard touchdown run on the first play of Towanda's next drive. Zach Sims hit the extra point and with 6:53 left the game was tied at 21.

"I think what happens is the kids start to realize that somebody is dying for them up front and they know they better die too," Dawsey said of the running backs. "Not literally, but you have to fight for extra yards. It was a great team effort. Zane had a great night, but when we watch the film we are going to see all kinds of great blocks up front."

On Mahanoy's next drive Preston Rogers made a huge pass break-up on third down to end the drive.

Towanda got the ball back and drove to the 28 after a 14-yard Neubert run, but a sack by Mahanoy ended the drive.

Towanda's defense came up huge on the next drive for Mahanoy. A sack on first down, and a stop in the backfield pinned the Golden Bears back to the 2-yard line and the Black Knights' defense held, giving them the ball at the 31 yard line.

After a near touchdown pass on first down, Neubert ran in for the game winner on second down.

Towanda played the game without one of their captains — Griffin Sites — and Dawsey said it was a lot of different players that stepped up in his absence.

"It's that old philosophy, if a wheel falls off, we aren't stopping," Dawsey said. "We've got to keep going so somebody's got to step up, somebody's got to step in and we had that tonight. I thought Dylan Hartmann did a great job filling in for Griffin offensively. Defensively Lacin Terry, a sophomore, had just an unbelievable game, he's going to be quite a football player for us. Preston (Rogers) filled in for Griffin (on defense) and he had a great night. Everybody stepped up and stepped in. I'm really proud of the kids. I'm proud of everybody, proud of the coaches, they did a great job.

"We can't get big-headed, it's one game, we have nine left."

While it was just one win, it was a special one.

"This is probably the best first game I have ever been a part of as a player here, as a coach here," Dawsey said.

Neubert ran for 283 yards on 19 carries with three scores and Jyshaire Robinson ran for 14 yards.

Kunkle was 7-for-13 for 54 yards passing and Pelka had three grabs for 25 yards, while Tama had two catches for 10 yards, and Dalton Potter and Hartmann had catches.

Lewandowski ran for 129 yards and threw for 67 for Mahanoy and Tyler Clewell ran for 65 yards on 18 carries, while MJ Terry ran for 24 yards.

Both teams had one interception in the game.

Towanda is at Bucktail next week.