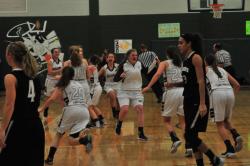 WELLSBORO — The Green Hornets handed Athens their first league loss of the year, 49-46 in overtime.

"We haven't had a signature win all season," Wellsboro coach John Davis said. "We beat the teams we should have beaten, but we hadn't pulled off any upsets. This was a good team we played tonight, that's why they were ranked where they were ranked. They played hard, they fought back and I couldn't be more proud."

Rachael Tuttle put Wellsboro up 41-40 in the final minute of regulation, before Emily Lunger hit a free throw to tie it for Athens.

In overtime Lizzie Poirier and Jessica Grab hit big shots to put Wellsboro up early and a three-point try by Athens at the end missed.

"They were clutch," Davis said of his players. "I subbed in a lot of players tonight and they all did very well. That was a great team win."

Poirier had 13 for Wellsboro and Tuttle had 10 in the win.

Cathryn Brought had seven for the Green Hornets and Janessa Davis and Autum Kitajima had six each.

Grab had four points for Wellsboro and Emma Poirier had three.

Athens got 19 from Shanell Baglini, with five boards and four steals, and Breana Gambrell had 10 points and 15 boards.

Lunger had 13 points and Emma Adams had four points, while Kara Chapman had four boards.

Wellsboro hosts Troy on Tuesday and Athens is at NEB today.

The Tigers scored 22 fourth-quarter points to rally for the win.

Shaelyn Berguson had 16 points, with four threes, to lead Mansfield and JoAnne McNamara had 11 points, while Lauren Smith had nine points.

Miranda Hampsher had four for the Tigers and Brittany Weiskopff and Sara Swingle had three points each.

Towanda got 18 points, 14 boards and two blocks from Ali Daum and Shay Chandler had nine points and three boards.

Mansfield won the JV game 32-25 with Berguson scoring nine for Mansfield and Chandler getting 10 for Towanda.

The Panthers outscored Canton 26-14 in the second half of the win.

Aaliyah Bevacqua had nine points and two boards, with three steals, and Vicky Rought had six points and five boards, while Jaycee Brown had three points.

Tamara Hess had seven for the Warriors and Hailey Wesneski had six points.

Playing without senior Sam Gentile, the Trojans got 28 points from Morgan Gentile in the victory.

Gentile had nine boards, 12 steals, four assists and a block.

"We had a total team effort tonight, which we needed playing without Sam Gentile due to a sprained ankle," Troy coach Brian Burchard said. "Morgan Gentile was one rebound away from a triple double, while also scoring the 500th point of her career, as a freshman."

Madison McClelland had nine for Troy and Carla Proto had six points.