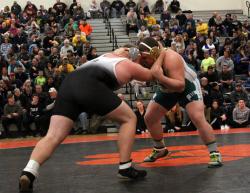 The Rams would able to nab third place, beating NTL rival Athens 40-34 for the second time this season, and will move on to wrestle District III runner-up Bermudian Springs down there on Monday.

"We knew coming in it was going to be a battle with Southern," said Wyalusing coach Gary Haley. "Unfortunately we came up a little bit short. But you have to be happy with third."

Wyalusing started strong with a 46-24 win over Montoursville, then fell to Southern Columbia 35-30 in the semi-finals.

The beat Muncy 45-27 in the consolations before then edging the Wildcats.

"Having beaten Athens a little earlier in the season, we knew that they, I'm sure, wanted a rematch with us and we challenged the kids and they stepped up," said Haley.

Otis also claimed his 100th varsity win, quite a feat for somebody who didn't make the regular line-up until halfway through his sophomore year.

"It feels great," Otis said. "I finally got my goal, which was 100 wins. Following in the footsteps of my brother (Dylan Otis) and my cousin Colin Edsell. Now we just have to get Creighton on there and it will be a family affair on the 100 win board."

His coach certainly has noticed Otis' work these past two and a half years.

"He's one of those kids that shows what hard work can do," said Haley. "He hung in there his freshman year, he didn't get a lot of JV bouts. His sophomore year, he fought his way into the starting line-up and a couple years later he's got a hundred wins. He's got a great career, he's got a state medal and he's looking to get back to states this year and get high on the podium."

"That's even more of an accomplishment," added Otis. "Not a lot of kids can accomplish 100 wins in just two and a half years of wrestling."

Brian Courtney (132) made it 15-0 with a fall over Colton Johnson but by winning the flip Wyalusing was able to get those six points back by having Luke Yonkin (138) pin Devin Sweat in 3:44.

Athens' Nate Bradley put the Wildcats up 28-16 with an 8-4 win over Ryan Kipp, but that lead quickly vanished as Mike Wilcox (195) and Cody Tunnicliff (220) recorded forfeits to knot it up at 28-all.

Athens' A.J. Burkhart (113) then pinned Kregory Johnson in 13 seconds to finish out the match.

Schum won 9-0 over Isaiah Gingerich at 120 pounds, while Doss had a 5-2 win over Charles Steinbacher, and Kipp won 8-3 over Cameron Wood.

Then came their big match-up against Southern Columbia, which was the closest match the Tigers had all day.

Yonkin edged out Mike Miner 6-4 at 132 to stop the bleeding but Southern then went on another run.

Tied at 1-1 after seven minutes, Linn got an escape in the first 30 seconds of the tie-breaker then turned Haley for back points to get the win.

Edsell was able to secure a 7-1 decision over Cal Haladay at 160 to stop the bleeding.

Southern got back to back wins as Preston Zachman (170) earned a 7-2 decision over Ed Mapes while Gage Garcia (182) pinned Kipp in 1:00 to secure the victory.

This was not how Otis wanted to him his 100th, though.

"There was a couple matches that we had on paper that we thought it would go the other way," explained Otis. "It would have been cool if it came down to me and I won it and got my 100th win that way."

This was a match that wrestled 10 times would get 10 different results.

However, they didn't have long to reflect as they needed two more wins to take third.

"Coach Fisk and I told the kids that the key to showing what kind of team we have is being able to bounce back from a tough loss," said Haley. "And we beat Muncy, and Muncy's a solid team."

Haley (152) had a 3-0 decision over Coleman Good, Edsell (160) scored a 12-0 major over Noah Gush and Mapes (170) earned an 8-3 decision over Michael Kustanbauter to finish off Muncy and reach the third place match.

Going forward this will be just some more hardware for Wyalusing's seniors, who now have two third place medals to go with their two district championships.

"They're a special group because they've been through this grind," said Haley. "It's a great group of seniors, they're certainly going to be missed, but hopefully we have a lot of wrestling left in the season."