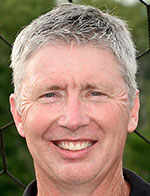 Coach Fitch is in his fourth year as head coach of the Hornet Boys Soccer team and his 12th overall with the team. Coach Fitch is a 1988 graduate of Canton Area School District and received an undergraduate degree in 1994 from Messiah College in Health and Physical Education.

In 2006 Coach Fitch earned his master's degree from Mansfield University in Education with a concentration in Elementary Education. Coach Fitch completed his second master's program in April 2019 with a degree in Athletic Coaching from Point Park University in Pittsburgh, PA.

Before joining the boys coaching staff in 2010, Coach Fitch served as a high school varsity soccer head coach for eight years. He spent four years at New Covenant Academy in Mansfield, PA from 1994-98 as the boys and girls head coach, and was the head coach of Wellsboro's girls soccer team from 2004-2007.

Coach Fitch currently lives in Wellsboro with his wife Deb and his three children: Noah, Sydney, and Micaiah.

Hornets come up short to Montoursville.

Hornets rolls to 7-2 win over Williamson on Senior Night.

Hornets roll NEB on the road.

Hornets cruise to 2nd win of season over Towanda.

Hornets roll to 7-1 win over Williamson.

Hornets shutout Troy on the road.

Rudy commits to University of Scranton.

Shaffer NTL Coach of the Year; Bleggi and Kohler selected to All-Star team.