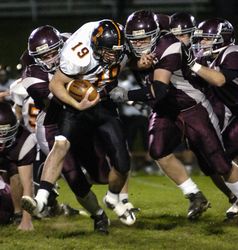 Searching for some extra motivation, Loyalsock freshman linebacker Michael Kinney popped in a DVD and let the emotion overtake him.

Instead of opting for Remember the Titans or Rudy, Kinney went with the 2007 Loyalsock highlights. Then Kinney and his teammates did the 2007 District 4 Class AA champions proud.

Kinney made 12 tackles while Shane Carey threw for 161 yards and ran for a touchdown as Loyalsock blanked Towanda, 10-0 in a rematch of last year's district championship at Kenneth Robbins Stadium. The Lancers (4-5) kept alive their slim district playoff hopes and showed one of this year's qualifiers why they could be dangerous if they advance.

"Before the game me and my buddies watched that highlight film. That always gives you goose bumps when you watch it," said Kinney, who set a hard-hitting tone by making four tackles on Towanda's opening possession. "It's amazing being up here my first year at varsity. I love all these guys. I wouldn't want to play for any other team. These guys are like my family."

Kinney clinched the win when he intercepted a Dakota Roof pass at the Lancer 10-yard line and returned it 35 yards. That stop came after Loyalsock had two touchdowns negated by penalties on its ensuing possession.

"That gave us a lot of incentive to go out and play even harder. It's just another thing to overcome," two-way starter Pat Green said. "We had to come out hard and take it to them and show them what kind of football team we are and how much we've improved over the year."

Loyalsock improved by playing the likes of Hughesville, Southern Columbia, Bloomsburg, Mount Carmel and Montoursville. Towanda has a solid team, but had not been tested like the Lancers and the defending champions wanted to make a statement. Consider it sent.

"I'm proud of the seniors. They have worked so hard to get to where they are today. I know the record doesn't show it, but tonight showed it," Loyalsock coach Alex Jackson said. "It helped that we played some really good teams the last few weeks. The guys played their hearts out and I can't ask for anything more."

Loyalsock led 7-0 early in the second quarter when it ran six straight times and went 44 yards. Carey capped the drive with a 1-yard touchdown run, but Brandon Smith was that possession's star. The fast and shifty junior ran four times for 42 yards, setting the touchdown up with a 30 yard run.

The Lancers controlled the ball throughout the second half and took a 10-0 third quarter lead on Jackson Person's 27 yard field goal. Carey threw well on the drive and dissected the Black Knights when he had time. The senior completed 12 of 15 passes for 161 yards and his three incompletions were dropped balls.

"We're starting to click now as a team," Green said. "A lot of guys are getting used to their positions and are knowing where they need to be and it's showing."

"We didn't get down on ourselves. We just kept coming back and hitting them," said Kinney, whose older brother Don also played a strong game. "We played the whole game the way we started it. The intensity was still high and it was a fun game."