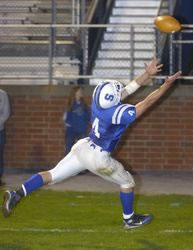 Since a 47-0 loss to Lewisburg in Week 1, South Williamsport has grown and steadily improved. All that hard work finally paid off Friday.

South gained nearly 300 yards of offense and controlled the line of scrimmage and Sophomore Caleb Stetts scored a pair of touchdowns to notch its first win of the season with a 28-6 triumph at Rodney K. Morgans Stadium.

"It feels really good to them. We were just with them and we were really happy with the way they won the game," said first-year South Williamsport coach Mike Pearson. "It wasn't a sloppy game, it was a hard-played game on both sides but I thought because of our kids playing the way they did tonight, that was what we were most pleased with. It was a good game all the way around."

In a game that featured two teams that heavily relied on the run, South's offensive line opened holes for South's running game and the Mounties didn't waste much time taking control. On its second drive, South went 65 yards on just nine plays. Quarterback Ryan Bastian completed three passes for 41 yards and capped off the drive with a 14 yard touchdown pass to Matt Marzzacco.

Just before the end of the first quarter, South's leading rusher Mark Smithgall grabbed the first of his two interceptions and three plays later Stetts scored his first touchdown of the game and quickly South (1-5) had a two-touchdown lead.

Bastian, who enjoyed a strong passing game, rushed for a one-yard touchdown on South's first drive of the second half. Included in that was a 36 yard completion from Bastian to Marzzacco.

Stetts (11 rushes 47 yards) scored South's final touchdown on the first play of the fourth quarter for a 28-0 lead. That drive went 65 yards on 11 plays and took nearly six minutes off the clock.

In addition to the ground game, Bastian enjoyed a strong game throwing the ball. The 6-foot-3 senior completed 8 of 10 passes for 107 yards, no interceptions and the touchdown pass to Marzzacco. Bastian entered the game with 165 yards through the air.

Not to be overlooked, South's defense did a great job containing Sayre's do-everything Robert Rought. Rought entered Friday's game as one of the area's leading rushers with 662 yards and six touchdowns, but the Mounties held the junior to just 31 yards on nine carries.

Sayre (1-5), whose only win this year was a 25-12 win over Montgomery in Week 4, finally scored late in the fourth quarter.

Rought got hurt and left the game on Sayre's first possession of the fourth quarter but senior Kyle McCabe stepped in and threw a 19 yard touchdown pass to Dominic Valenti to put the Redskins on the board.

Sayre rushed for 136 yards as Nicholas Nasoni had 50 yards on 11 carries.