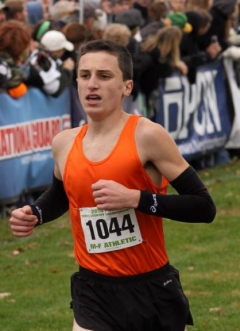 HERSHEY - The number four must have some kind of pull on Towanda boys' cross-country runners.

In 2010 Joel Christian was fourth at states as a senior, in 2012 Aaron Valoroso was fourth as a senior and now in 2014 Simon Smith finished fourth place in the PIAA Class AA as a senior.

"It feels good," said Smith. "Top five has definitely been a big goal of mine."

He also wanted to take a shot at getting the state title if it was there.

And he was close.

"I just wanted to get out fast," Smith explained about his start. "All my starts this season have just been phenomenal and that's what I was going for and my start today was great."

He ran up front through the first half mile that formed a front pack of three runners shortly after the mile. As Simon made his way along the creek he sat in third just before they crossed the bridge and headed up to the hills.

"I was going to try to work the first couple miles with them and see what I could do," said Smith.

However, they were up to the challenge through the hills and Smith wasn't able to overtake them.

"They were just really strong the whole time," he said. "Down behind the sewer plant I was just struggling after going out so fast. One more kid just got me but I'm still happy with fourth."

"Everyone was going for it," he said about the state title. "They just had it going better for them."

Smith ends his cross-country career with two state medals but he wasn't thinking about the end. With spring just a few months away he was looking to add to his 1600 state medal from last season.

"I'm not done yet," Smith remarked. "Hopefully go into track and get some more."

In the Class A boys' race several local individual runners had strong days but none medaled.

"I feel like I ran well," said Sweet. "I think that's the best I've run there. I know it's the best place that I've gotten. It was a good way to wrap it up."

The senior had two years of experience going into the race so he knew the ins and outs of the course.

"I kind of wanted to get out faster so you don't get boxed in," remarked Sweet. "I got boxed in a little bit in the beginning but not bad. You want to get out but not use it all in the beginning or you will be done for the hills. I've ran there quite a bit so I knew where you could turn it on and not when to."

"I felt pretty good starting out," said Beard. "Some of those hills worked a lot of energy out of me. I felt amazing at the end of that race."

He was happy with how his day turned out. "I got a much better time than what I thought I was going to get," said Beard. "A pretty good place. I was happy I just made it here."

This motivates him going into next season.

"I want to try to get up into the medal places next year," he said. "I just have to kick everything into gear, miles over the summer in the off season, work in track...just a lot of work."

"I felt pretty good," said Gleckner. "I started out fast because I knew that I needed to get out there so that I'm not stuck behind everybody at the beginning picking off runners."

The senior felt those hills in the second half.

"I had to push up them hard so I didn't lose any places or time," said Gleckner.

He came up just short of his goal of top 50 but was pleased with his race.

"It felt pretty nifty," Brennan said. "I'm happy with it. I felt great, I was happy with the way I finished my career."

"I felt great," said Choplick. "I was real good breathing, good going down the hills. It felt great, picking off kids one by one."

The senior wanted to get out fast at the start.

"A quick head start and don't get boxed in," Choplick said about his game plan. "Keep picking kids off one by one and beat them on the hills."

And he was happy with how he finished.

"I couldn't have ended it any better way," remarked Choplick.

"I hurt a little bit," Schools said about his race.

The senior used the same plan from districts that got him here: stay with Warrior Run's Dallas Blickley Jr. He did just that as Blickley finished one place ahead in 18:41.

"I drained all my energy on those," Schools said about the hills. "I had a strong finish, it was pretty fun running up past the finish, I liked that part of the race."

He felt this was a good way to end his season.

"Just getting to states was a good way to end for me," Schools said. "But running in it was better."

South Williamsport's Griffin Molino repeated as Class A champion, winning the race in 15:46.