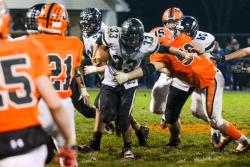 JERSEY SHORE — Athens traveled to Jersey Shore for the opening round of the District 4 playoffs and dropped a 31-7 decision to their host. The Wildcats had their opportunities throughout the game but could not overcome miscues on both sides of the ball.

The Bulldogs got on the board first when quarterback Elijah Shemory found Hunter Frantz for a 15-yard scoring strike. Cameron Griffin provided the PAT and Jersey Shore took a 7-0 lead with 10:08 left in the opening period.

Shemory's second touchdown pass came with 6:19 left in the first when he found Kevin Titus for a 16-yard pitch and catch. Griffin's kick would split the uprights as the Bulldogs pushed their lead to 14-0.

Jersey Shore would increase their lead again when Jarett Guthrie plowed his way in from one yard out. Griffin would convert his third of four PATs on the night giving his team the 21-0 lead with 10:18 left in the second.

Athens finally got on the board with 12 clicks left on the clock before the half. Kaden Rude was able to step in front of a Shemory pass attempt. Rude then raced 95 yards down the Athens sideline and in for the score. Shane Colegrove's kick split the uprights as Athens cut in to the deficit 21-7 heading into the locker room.

Jersey Shore once again upped their score when Frantz would get an interception of his own. After securing the interception Frantz took it 55 yards to the house boosting his team's lead to 27-7. Griffin's final PAT attempt again proved true and the Bulldogs took the lead 28-7 with 7:45 left in the third.

With 11:55 remaining Jersey Shore called out their field goal unit. Griffin would put the pigskin through the uprights for the final time and the Bulldogs made their last margin 31-7.

Afterwards Athens coach Jack Young said, "I'm proud of the effort. We played solid defense, we just gave up too many big plays in the air." He concluded "it just wasn't in the cards for us tonight but I'm super proud of this group of kids."

Athens finishes the year at 7-4.