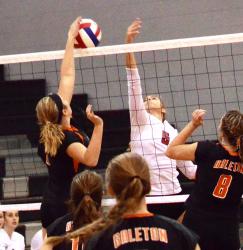 ATHENS — The Galeton volleyball team had never won a District 4 title before.

They'd never played in a regional game and never were one game away from the state Elite Eight.

"I think nerves and the loudness in here got to us, we were off with our hitting," Galeton coach Jessica Green said.

Early in the first set, both teams were back and fourth, but midway through, Blue Ridge started to take control.

"It feels absolutely amazing," Abigail Hartman said. "We have been waiting for this for a long time."

In the second set, Blue Ridge came out strong and never looked back.

Galeton fought back in the third set. After a back-and-fourth set, Galeton started to pull away late to force a fourth set.

However, Blue Ridge didn't panic and they came out on fire to start the fourth set.

"We did a nice job staying positive," Hartman said. "We all worked so well together. We just really clicked tonight."

The Blue Ridge players know it was working together that was key.

After dropping the third set, Blue Ridge knew they had to come out strong.

As the match neared a finish, the Blue Ridge players sensed what was happening.

"It was unbelievable, we were all ecstatic and couldn't wait for that last point," Hartman said.

Fekette had 12 kills and 15 assists in the match and Kalynne Myers had 13 assists and 10 kills, with four aces.

Alexa Stanley had two aces and Kandace Smith had 19 digs.

Now, it's onto the state quarterfinals for Blue Ridge.

"It's so special, we have been waiting for this for three years, so it's awesome to finally get it," Fekette said.