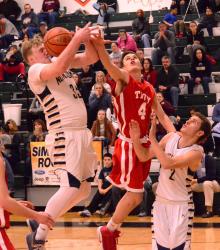 Nick Clark hit one of the biggest shots of the game as he hit a three to put Notre Dame up by two.

Anthony Deitrick then scored inside for Troy to tie the game with 1:25 left.

Ben Cook scored and was fouled for Notre Dame. The free throw missed, but Notre Dame took the lead by two. After a Troy attempt to score failed, Raupers hit one of two free throws to put Notre Dame up three.

Clark Jackson went the length of the court for a layup to get Troy within one at 52-51 with 3.4 left.

Notre Dame hit two free throws to go up 54-51 with 2.1 left, and Jackson's half-court shot hit off the side of the rim as Notre Dame hung on.

Raupers led Notre Dame with 15 points and Kyreese Fisher and Derrick Stark each had 12 points, while Cook had 10 points.

Clark had four for Notre Dame and Dan Stearns had one point.

Stark had a double-double, with 11 boards and he added five steals and two assists, while Cook had eight boards and two blocks.

Raupers and Justin Bauco each had two assists.

Deitrick had 14 points and nine boards, with three blocks, for Troy and Wallace had 11 points, two steals and two boards.

the game was tied at the half, but Horseheads outscored Notre Dame 20-10 in the third quarter of the game.

Ellie Mustico had two points and three rebounds and Courteney Crater had four points and six boards in the game.

Jess Schiefen and Allison Richmond each led Horseheads with 15 points and Jenna Richmond had 12.

Seton Catholic defeated the NP Mansfield girls 87-25 in the quarterfinals of the Josh Palmer Fund Tournament on Tuesday.

Smith had a double-double, adding 12 boards. Elli Fry had eight boards and Hampsher had five boards.

Lexi Levy had 24 points and nine steals for Seton Catholic in just 16 minutes.