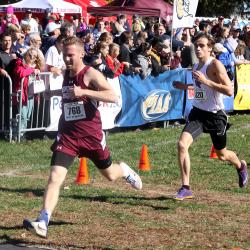 HERSHEY — Northeast Bradford came in with outside hopes of reaching the podium as a team. If everybody ran their best, they could finish in the top two.

"Our lofty goal was everybody in the top 60," Murphy said. "It kind of worked out kind of how you knew it would."

Individually, though, NEB came away with two state medalists in Ellis and Garret Smith.

"It feels good to get the medal," Ellis said. "I didn't feel alright today, it happens. I was hoping top 10, but a medal's a medal."

Ellis went out in a pack behind the leaders but was never able to work his way up to the tight pack.

"That kind of worked and that kind of didn't," he said. "I feel like on a good day I don't know if I would have beaten them, but I could have been closer. It just didn't happen today."

Ellis is eyeing the PSAC for next season.

For Smith, this is his second medal as he medaled as a freshman. His sophomore and junior years he came up short by mere seconds.

"I've been working hard my whole season," said Smith. "My last year, you've got to go out strong."

The senior had a plan and executed it well, starting out around 30 and working his way up through and ending with a strong kick.

Smith was especially pleased to medal by quite a spot, instead of sneaking in.

"That feels great," he said. "I just worked really hard this year and hard work pays off."

Murphy praised Smith for his dedication and work ethic this season.

"It's really about Garret's whole year," he said. "He came into this season with a refreshed attitude that he was going to medal. He missed last year by three or four seconds and he's been working hard all year, and this is just the end result of all that hard work."

Murphy also believes that on a different day Ellis is fighting for gold.

"I believe Casey is a top 10 in the state runner," he said. "I don't know if it was Casey's best day. He does lack experience in big races. He's only had one other state meet that he's had. This is Garret's fourth, a lot of our kids are here every year and Casey may be a little inexperienced there, maybe the nerves, because he's super fit and he's super mentally strong. Maybe the nerves got to him a little bit."

NEB may need to work extra hard to keep their string of state appearances going next year as they lose three of their top five, including their 1-2.

"I took the pace too fast in the beginning," admitted Perry. "I cramped up in the last mile."

Perry wanted to hang with Garret Smith, something he had done at the NTL meet and districts this year.

"Once he started hitting the downhills, they're not my strong suit, so I just kind of fell back," said Perry.

This will help the sophomore game plan better for next season.

"I'm not going to take the beginning as fast," Perry said. "I'm going to pace out the first two miles, then hit the last one harder because, my first two splits, they were way too fast and my last one was way too slow."

This was also a new experience for Patton.

"I felt very tired," said the Ram freshman. "This course tired me out a lot."

Patton came in as a blank slate.

He also went out a little quick.

"I ran my first mile way faster than I should have," said Patton. "That's what killed me."

This is something to motivate him for next year.

"I know you can't come into something being the best," Patton explained. "You've just got to work your way up there."

Mercyhurst Prep's Noah Curtin own the race in 16:23.

Doud wasn't happy with his race as he got boxed in. Last year, Doud ran in Class A and noticed a big difference between the two races.

"Last year, I had good positioning," he remarked. "The start was much faster this year."

This will help Doud prepare for next season.

"My start, work on not getting boxed in," he explained.

For Allen, this was a new experience.

"It was intense," he said. "You definitely threw some elbows and you receive some. It was just so tight and everyone was just trying to get the best footing they could."

Allen also tried not to get boxed in at the start.

"I had to start out fast, because of everyone cutting in front of me, because I was in the first box," he explained.

The sophomore didn't work the hills as he hoped to make-up ground on the flats.

Regardless of his finish, Allen liked the race.

"I felt really good," said Corson. "I thought it was a really good first states race."

The junior was 32nd in 20:26, 20 seconds from 25th and the medals. She was running alongside Moyer at the start, something they did together at districts.

"I just happened to find her," said Corson. "I didn't really plan on it, but I found her in the crowd."

The junior moved up throughout the race, running close to 35 the last mile of the race.

"I saw some people were slowing down, so I just kind of picked it up and passed them at the end," said Corson.

Being so close to the medals is tough, but acts as a good motivator for next year.

"I was slightly disappointed, but I was shooting for top 50, but I ended up over doing my goal anyway," said Corson.

"I felt pretty good," Moyer said about her race. "I went out a good pace and I was happy with place and my time."

For her senior year, she plans on hitting the road.

"A lot more training over the summer," said Moyer. "Just not getting into my own head. I think that's going to help me next year."

"I thought they ran a solid race," said Trojan coach Gary Ward. "We wanted to place a little bit higher than we did, but our 1-to-5, I believe, was 50-60 seconds. So we're happy with that. We just want to keep working on bringing that group down a little bit further."

He noted that the hills were tough for the Trojans.

"These up and downs, up and downs; you've got to be ready for this course," Ward said. "Sometimes during the regular season I think you might focus a little bit too much on the district course and not train as much for the state course. I think next year if we train hard and are lucky enough to be down here, we really need to be ready for this course. This course you really need to train specific for it."

Troy gets everybody back and adds Mckenzi Bellinger, one of the area's top junior high runners.

"We're real optimistic," said Ward. "I've got a lot of girls that run because they enjoy running. They go to local 5Ks, they run together out in the county, their families run. The culture is getting there and they really had a good time, and I know they want to be back."

The District IV champion Isabell Sagar of Loyalsock medaled in 16th at 19:54. St. Joseph's Sera Mazza won the race in 19:17.

In the team standings, St. Joseph's Catholic beat Elk Lake on sixth runner. Both teams had 103 places, but St. Joseph's sixth was 49th and Elk Lake's was 73rd.

It was a tough learning experience for the freshman.

"I was really, really nervous," she said. "I really wasn't looking forward to it."

Jones got boxed in at the start and was never able to recover.

"There are definitely a lot more people so it was definitely a lot harder to get out and maneuver through everyone," she said. "I was boxed in quite often and then after a while I just kind of let it be."

This can only help her for next season.

"I am definitely going to go out a lot faster," Jones said. "And not let it be."

In the Class AAA boys', Council Rock North won with 76 points while Carlisle was second with 118.

The PIAA changed the course around and local runners took notice.

"There were less hills in this one," added Moyer. "Or maybe because we're going up the hills backwards, but I like this course much better."

They added a long flat loop around the creek behind the finish but still hit poop out hill before the end.

"That hill is what takes it all out of you," said Moyer. "You just know you just have to get up that as fast as you can and use that hill to your advantage."