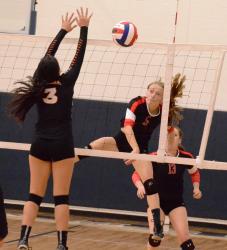 TIOGA — During the regular season the Towanda Black Knights were the queens of the NTL Large School division.

The Black Knights were able to get past Liberty during the regular season to claim the title.

On Thursday the teams met again, this time with the biggest prize on the line — the District 4, Class AA title.

For Liberty's players a lot of it came down to the momentum they had all night long.

"The momentum was huge," Lauren Smith said. "We cheered the entire time and I think it really helped us.

The Liberty players know how special the win was and how hard they worked for it.

"We have come so far and it's definitely paid off all the work we put in," Kaya Weeks said.

"It feels great to be able to win with my teammates," JoAnne McNamara said.

Liberty coach Holli Smith was happy with the way her team played.

"The serving was on, defense was on, we played very cohesive all night long," she said.

The players know that everyone had to contribute to keep things going well.

"Every member of the team worked together to make the momentum stay," McNamara said.

The first game was even early as Towanda's Kendra Abrams caused some problems for Liberty with her defense at the net.

For Liberty, they knew that Towanda's size would be a challenge and they just kept playing their game.

"We knew they had some big girls and they were going to come out swinging and we just played our ball and left everything on the court," Weeks said.

Liberty knew they had a game-plan going in on what they had to do against Towanda.

"We had to work together as a team and execute everything," McNamara said.

"We have been working on this for weeks and we did everything Holli told us to," Weeks said. "We played smart and we played our best ball."

After winning the first game Liberty dominated in game two, leading from start to finish.

In the third game Towanda came out strong and led most of the way, before Liberty tied the match at 17.

With things tied at 17 the Mounties outscored Towanda 8-1 down the stretch to close out the game.

Liberty knows one of the big keys was their defense.

"Our defense definitely paid off for us tonight, it came up huge," Smith said.

"I think our defense was phenomenal," Weeks said. "Defense wins games and it definitely paid off."

For Liberty winning the match and the title was special.

"We had to work together as a team and execute everything," McNamara said. "We had to make sure we were ready to do what we had to do."

The Mounties know they played a good match.

"We just played our best ball, every girl on this team did something special and we did our thing."

McNamara had 15 assists and Elli Fry had three blocks and five kills.

Brooke Harvey had 10 kills and 11 digs for Liberty and McKenna Grega had 11 digs, while Maddison Minyo had five kills.

Smith had 11 kills, 14 digs and three aces and Weeks had eight digs and two aces.

Sydney Schoonover had four points, five kills and six blocks for Towanda, with a dig, and Elizabeth Schultz had a point, six kills and 14 digs, while Ally Tama had a point, two kills, 10 digs and nine assists.

Madi Doss had 14 digs and five points and Larisa Terry had a dig, while Madigan Allen had a point, four kills and two digs.

Liberty plays Holy Redeemer, who has won 10 straight District 2 titles, at 5 p.m. on Tuesday at Pittston in the PIAA playoffs.

"We are pumped, we are ready, it's go time guys," Weeks said.

"We are super excited, we are ready to take on the challenge," Smith said.