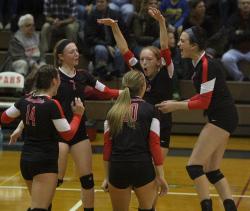 YATESVILLE — When it comes to the opening round of the girls' volleyball Class 2A state tournament, it becomes a survive and advance mentality.

Both Holy Redeemer and North Penn-Liberty were affected by copious amounts of carrying calls in the game, but the Royals showed tremendous mental toughness to grind out a 3-1 victory on Tuesday night.

"I told the girls that this is the toughest victory you will be involved in," Holy Redeemer head coach John Kablick said. "The girls had to grind it out and we had to change our whole game to get through this."

The Royals came out strong in the first set, propelled by a Brynn Kukosky finesse shot just over the net and two aces from Sarah Kuderka to rush out to a 3-0 lead.

As North Penn-Liberty battled back, Holy Redeemer used a stretch in the later portion of the set to break the game open. Amanda Curcio ignited the Royals with a kill at the net. Skylar Osenkarski finished things off with three kills, a block and an ace on match point to give the Royals a 25-17 win.

"If we go far enough, I believe she has the potential to be all state," Kablick said of Osenkarski. "She is coming on. She does not get too high or low or nervous."

Redeemer took control of the second set mid-way through. Osenkarski had two kills and a well-executed tip shot to put the Royals in the lead 13-12.

Kuderka made a diving dig to keep a ball alive to earn the Royals another point. From there, Redeemer put the match away with two Curcio kills set up by Ashley Andrejko to win the set 25-19.

North Penn-Liberty showed some gumption in the third set. The Mounties broke the set open with four kills from Lauren Smith and three kills from Brooke Harvey to keep the match alive.

The fourth set began neck and neck. The Mounties took a 15-12 advantage after a Harvey ace and Elli Fry digging a shot over the net to a perfect spot on the floor.

Redeemer fought back by changing their setting process to straighter arm digs to combat the amount of carrying calls. The adjustment paid off as Osenkarski registered a kill, followed by a Curcio kill from the Andrejko assist. Andrejko would set up Curcio again to pull the Royals within a point at 20-19.

With the match hanging in the balance, Korren Hicks belted a serve for an ace. Curcio followed with a kill on an assist from Andrejko and an ace of her own to take a 24-22 lead.

On match point, Osenkarski displayed her athleticism rising up above the net and slamming home the game winner to propel the Royals onto the next round of states.

"I think we play together as a team," Osenkarski said. "I know that if one of us gets down, one of us will pick us up and we will be good."