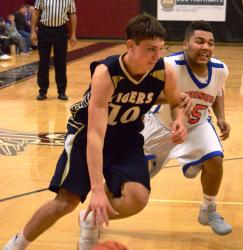 ELMIRA, N.Y. — North Penn-Mansfield overcame a 29-25 halftime deficit to beat Edison 67-60 in the opening round of the Regional II bracket of the Josh Palmer Fund tournament Wednesday.

Brock Burleigh had 15 of his 27 points in the fourth quarter as the Tigers outscored the Spartans 25-19 in the final frame.

Nick Kasper chipped in with 16 points and six boards, Shane Kelly had 12 points and 11 rebounds while Konnor Manikowski added 10 points and five rebounds.

Joel Whitteker added two points to round out the Tigers.

NP-Mansfield will face Johnson City in the title game on Friday at 5 p.m.

ELMIRA, N.Y. — Troy led by 12 points at the half but a 30-13 rally by Newfield in the second half gave them the consolation win Wednesday.

Down 32-20 at the break Newfield scored 12 straight points to tie the game and pulled ahead from there.

Anthony Deitrick had a double-double of 17 points and 12 boards while blocking two shots to lead Troy.

Seldon Rogers netted two to round out the Troy side.

Stephen LaBarge and Patrick King had 12 points each to lead Newfield while Quintel Clements added 10 to go with his 14 rebounds.