Sayre runs their way into a district final - 2016 NTL and District 4 News - WellsboroAthletics.com

Sayre runs their way into a district final. 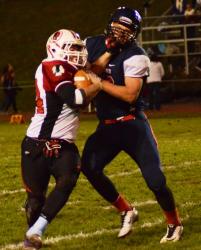 SAYRE — Chalk up another first for the Sayre football program.

That game, against Muncy, which knocked off Wyalusing 27-18 Friday night in the other semifinal, will be at 7 p.m. Friday.

Canton took the opening kickoff and went right down the field, racking up three first downs. A 32-yard run by James Bowman, who was injured early in the team's game three weeks ago, and a 25-yard pass from Ridge Moore to Camden Smith, put the ball at Sayre's 4-yard line. Bowman got to the 1-yard line on first down, but the Redskins moved Canton back three yards on second down. Moore completed a pass for no yards and the Redskins successfully defended a fourth down pass to take over on downs.

The Redskins went essentially nowhere on their possession and Canton took over at Sayre's 42 after the punt. After a first down, Moore found Levi Gaiotti over the middle for a 33-yard touchdown strike.

Sayre answered almost immediately. Starting at their 34-yard line, Sayre handed the ball to Tylor Belles for 11 yards and then to Nate Garrity on the next play. Garrity found a hole and raced 55 yards to knot the score at 6-6 with 2:33 left in the first period.

"I felt that took the momentum away from them," said Satterly.

The Redskins got a stop on the Warriors' next series, forcing a punt from deep in Canton territory. The Redskins started moving around on the line, leaving the Warriors in doubt about where the pressure would come. By the time the ball was snapped, it seemed the Warriors were a bit rattled. The snap was not cleanly caught and before punter Sawyer Wooster could get the ball off he was swarmed by Redskins. In the melee, Garrity stripped the ball and raced 14 yards to paydirt to give Sayre a 12-6 lead.

"It was a great play. It was something that we worked on and it went well," said Satterly.

After stopping the Warriors again on downs, Sayre started from its 40-yard line. Three plays netted a first down in Warriors territory, then quarterback John Esposito found Jake Goodrich down the left sideline. Chased by a trio of Warriors, Goodrich ducked between two at the 15-yard line and raced untouched into the end zone. James Esposito's PAT kick put the Redskins up 19-6 with 8:11 left in the half.

A series of punts gave Sayre one last chance before half time and the Redskins very nearly made it pay off. A 14-yard run by Goodrich and 38-yard pass from Belles to Isaiah McClenny put Sayre inside Canton's 10-yard line at the nine. Matt Ingrassia, who had 158 yards rushing on 18 carries, got to the three before a penalty moved the Redskins back to the eight. On the last play of the half. Belles was nearing the goal line, but tackled before he could cross the goal.

Then he didn't get up.

Belles was in obvious pain as he was helped off the field and didn't return. His absence would be felt more on defense than offense, but even there players stepped up.

His teammates picked him up from there.

"Tylor's a great defensive end," said Satterly. "We're putting kids out there who don't get a lot of reps at that position, but the kids we did put out there did a great job. (Zach) Hatch and Brandon (Northrup) both did a great job."

Sayre got the ball to start the half and played keep-away. Marching 57 yards in 14 plays, the Redskins converted on an early fourth-down play and converted a third-and-nine with a 16-yard Goodrich run. The biggest play was a 20-yard John Esposito pass to McClenny to put the ball at the Canton 15. Three plays later, John Esposito bulled his way into the end zone from two yards out. James Esposito hit the PAT to give Sayre a 26-6 lead. In addition to proving they could move the ball with Belles on the sideline, the Redskins took 6:08 off the clock in the process, scoring with 5:44 left in the third.

Canton answered, but the Redskins made them earn it. Bowman did the honors from a yard out, but by the time he scored there were just 24 seconds left in the third period.

Sayre took the kickoff and again rolled down the field. Again, they converted on a fourth-down attempt and the biggest play was a 19-yard Ingrassia run. Unfortunately for the home team, they left the ball on the ground at the Warriors' 30.

This time it was Sayre's defense that stepped up. The Warriors got as far as Sayre's 33, but a 5-yard loss and two incompletions ended that threat.

Sayre had another great scoring opportunity, set up by a 52-yard Ingrassia run that set the Redskins up at Canton's 12-yard line. Four plays netted just one yard from there, but the drives had done their job as Canton had just 1:17 left in the game by the time they took over.

"Matt and Nate are both great runners," said Satterly. "I got out of my comfort zone and went back to some of our older stuff and it worked. The offensive line did a great job. I was very pleased with the offense."

A pair of Moore passes picked up 44 yards, but after an incomplete pass. Gage Carnrike picked off a tipped pass thrown into double coverage and Sayre could kneel out the win.