Southern Columbia too much for Knights - 2016 NTL and District 4 News - WellsboroAthletics.com

Southern Columbia too much for Knights. 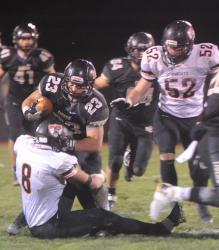 CATAWISSA — There's not much anyone can do or say after a game like Friday's Towanda-Southern Columbia contest. After Southern compiled 582 yards of offense, 490 of which came in the first half alone, en route to a 69-34 win over the Black Knights in the first round of the District 4 AA playoffs, Towanda coach Craig Dawsey stated the obvious.

"They're just a good team, they're better than we are, period," he said. "I told my kids as long as the clock was ticking, we were going to grind and they did so I'm proud of them.

"We started out 1-4 and then the team really rededicated itself in the second half of the year and they said they weren't done yet. They came out and earned the right to be here tonight. We lost but it was good experience for the team."

Southern quarterback Stone Hollenbach completed 6-of-7 passes for 158 yards and four touchdowns in the first quarter alone. That was also his line for the game, as Southern only attempted one more pass for the rest of the contest. His four touchdown passes, which came on successive attempts, were just the beginning of an offensive onslaught by the Tigers, who scored on all eight of their first-half possessions. The Tigers' 69 points were just seven shy of tying the program's all-time record for points in a game, which was set during the Henry Hynoski era.

The game was briefly competitive in the first quarter. After Southern put together an eight-play scoring drive on its opening possession, which would be its longest of the night in terms of plays, Towanda came up with a big answer as Griffin Sites found a hole and outran multiple Southern defenders down the right sideline to tie the game 7-7 with 7:19 left in the first. That would be the first of four touchdowns on the night for Sites, who had an outstanding game as he finished with 141 rushing yards on just six carries and three touchdowns — a 23.5 average — and also caught four passes for 104 yards and a score.

"Sites was fantastic tonight and he's coming back so we have some things we're really excited about for the next couple of years," said Dawsey.

After Sites' first score, the Tigers would answer right back just 31 seconds later. Thomas burst loose for a 44-yard run on Southern's first play from scrimmage on its ensuing drive, and then Hollenbach found Garcia down the middle of the field for a 20-yard touchdown reception to put Southern back up for good.

It was all Tigers from there as Hollenbach's next two successive passes all resulted in touchdowns. He found a wide-open Cameron Young from 34 yards out and then hooked up with Julian Fleming from 57.

"I thought Towanda looked like they didn't react that well to the play action pass in the two games we saw of them on film," said Southern coach Jim Roth. "They were selling out extremely hard against the run and if a team is going to overplay the run we need to be able to attack through the air and that was a good sign that we were able to do so."

Southern went to the ground for the rest of the game, as it would only attempt one more pass. Its four second-quarter drives all ended in rushing touchdowns, three by Garcia and one by Thomas. The only blemish for the Tigers was a 72-yard touchdown run by Sites late in the quarter after they had taken a 49-7 lead.

Sites found the end zone for a third time late in the third quarter, this time from 17 yards out to make it a 56-20 game. He then caught a 61-yard pass from Tanner Kunkle early in the fourth quarter as he slipped behind a Southern defender and then outran the pursuing defenders again after making the catch.

That play pushed Kunkle over 100 passing yards for the game, as he finished with a very respectable 125 yards on 11-of-18 passing, and also ran four times for 19 yards. He showed poise in the pocket, was only sacked once and twice scrambled for sizable gains when the pocket collapsed, once for 10 yards and once for nine.

"We're really excited about him and how he has developed this year," said Dawsey. "He's a 14-year-old kid who has just been lights out since about halfway through the season. He's poised, smart, a good leader and a good kid."

Keegan Kisner scored Towanda's other touchdown late in the fourth, getting loose for a 41-yard run. He finished the night with 90 yards on 17 carries in his final game. He also had 166 kickoff return yards to finish with 256 all purpose yards.