Towanda breaks in new mat with a win over Tunkhannock - 2016 NTL and District 4 News - WellsboroAthletics.com

Towanda breaks in new mat with a win over Tunkhannock. 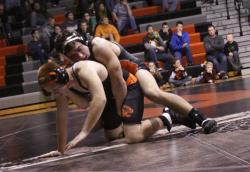 "There was a lot of stuff going on tonight, a lot chaos beforehand with all the different ceremonies." Towanda coach Bill Sexton said. "There was a lot of distractions so I was pretty pleased with the way the kids focused and wrestled tonight."

"We knew we were going to forfeit two weights to them at someplace and they ended up forfeiting two weights to us despite weighing in a full line-up."

"Overall I was pretty pleased with our kids. We got off to a big start with Jared Schoonover off the ball, a senior in his first varsity match. He really came up big tonight in his varsity debut." Sexton continued.

Towanda hosts the Dandy Duels tomorrow at 11:00am.