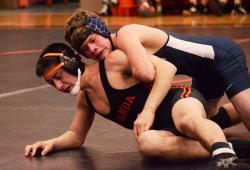 TOWANDA — The Black Knights had been waiting for this moment for a couple of years.

After coming up short in their bid to win their Dandy Duals the past two years, the Black Knights captured the title on Friday, beating Tioga in the final 42-25.

"I am really proud of the way the kids wrestled today," Towanda coach Bill Sexton said. "Coming into this tournament, you really have no idea. I thought probably seven of the teams could have won it coming in. I thought we wrestled really well through our pool and we got stronger the last two matches after that. I thought we got off to a good, dominating start against Coudersport, and then we got a real great run against Tioga there at the end to put it away before we got to the strength of their order."

With the match starting at 132, the Black Knights won the first eight matches to take a 39-0 lead, clinching the match before Tioga's biggest stars hit the mat.

"We knew how tough they were at six and 12 and really 20 and 26 and also heavyweight before that," Sexton said. "We knew we had to have the match put away by that point, because we would have thought they had a good shot of sweeping all five. Now, Nate Secules made sure that didn't happen, he had a real strong bout, probably his best bout of the day at 120 for us."

For Towanda, it as nice to bring the title home.

"That's our goal every year, to win this tournament and win the other one," Sexton said. "It's nice to get it back, it's the first time since 14 we won it. These kids that are seniors this year, they won it as freshman.

"I'm hoping it helps everyone's confidence. Everybody had a win today, everybody had a significant win today. Our theme this year is, we don't really have any superstars, we don't have anyone where you say 'that kid is going to go to states and medal this year,' like we have had others. We just have a team. We have to pull together, we have to compensate for some of the things we don't have."

In the final, Towanda moved some guys around and got some big wins, as they did all day.

"We had a couple places where we need to juggle a little bit, or can juggle a little bit. I thought we got a real significant win out of Levi Perry at 60, the young man (Max) Johnson he beat there, he is a real good wrestler, and we got a real good bout out of Larry Nichols bumping up a weight. Larry is a 52-pounder, he should be a 52-pounder, he bumped up to 70. He weighed in at 60 today and bumped up to 70.

"Another significant win for us was in the Coudersport match where we got the fall from Tyler Hawley. Tyler is giving up a little bit of weight this year at 6, but he wrestles real hard. He's a pretty decent wrestler. Today he came up with a big win there."

For Tioga, the experience was a good one.

"We are really young," Tioga coach Kris Harrington said. "I'm proud of them coming down here and competing. I feel really good about it. We are a team of freshmen and sophomores, it's nice to see them taking their level up.

"Winning four matches here, coming in on a day you weren't supposed to wrestle, seeing the kids wrestle hard, it's a good springboard to the rest of the year. We are just trying to get better and hopefully when February hits we will start to peak. This was a good starting point for us and I think we'll be a different team by February."

There were a lot of good performances for Tioga on the day.

"Stephen (Taylor) had a nice day, the Worthing brothers had a nice day, Austin Lamb had a nice day, our team overall, I'm pretty proud of them. We just have to stay off our backs a little bit and we'll be a pretty solid dual meet team the rest of the season."

Tioga got on the board at 220 as Daniel Hartman won 8-3 over Jared Schoonover. Tioga's Stephen Taylor (285) and John Worthing (106) won by forfeit, and Brady Worthing of Tioga pinned Hawley in 44 seconds at 113.

Secules beat David MacWhinnie 10-7 at 120, and Lamb won by major decision for Tioga 12-2 over Noah Shafer.

In the semifinals against Coudersport, the Black Knights won 42-31. Shafer pinned Brynen Kisiel at 126 in 3:03 to start things and Knolles pinned Thomas Wilson in 1:14 at 132.

Coudersport's Dustin Kudrick pinned Logan Johnson in 5:33 at 145 and Kisner won 5-2 over David Kudrick at 152.

Hawley pinned Chris Davis in 1:30 at 106 and Coudersport's Donovan Olney got a forfeit at 113, while Trevor Olney of Coudersport won 7-5 over Secules at 120.

Tioga got to the final by beating Hanover 46-31 in the semifinals.

Daniel Erickson of Hanover won by major decision 10-2 over Owen Wanck at 138 and Wood pinned Stephen Dule of Hanover in 3:11 at 145.

Hartman got a forfeit at 220 for Tioga and Nick Hannon of Hanover pinned Taylor in 285.

Towanda opened the day with a 70-6 win over Williamson.

Hunter Thompson had a pin for Williamson.

John Worthing, MacWhinnie, Lamb and Taylor all had pins for the Tigers.

Hunter Thompson went 5-0 on the day for Williamson.

Williamson fell to Spencer 78-6 with Thompson getting a pin.

Hanover beat Williamson 60-6 and Thompson had a pin in the match.

Williamson fell to Meyers 66-15. Thompson had a win and Tyler Dilly and Austin Lenard also had wins in the match.

Danville topped Williamson 66-18. Thompson, Matthew Carpenter and Dilly all had pins for Williamson in the match.