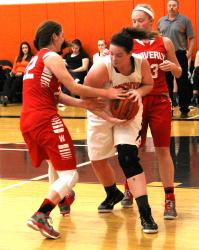 SAYRE - The Athens girls won the battle of unbeatens against Sayre on Tuesday, topping the Redskins 50-39.

Athens has not allowed a team this year to score 40 points in a game.

Breana Gambrell led Athens with 17 and Emily Lunger had 13 points for the Wildcats.

Ariana Gambrell had 10 points for Athens and Shanell Baglini and Kara Chapman had four each, while Emma Adams had two points.

Kaeli Sutryk had seven points for the Redskins and Molly Ball had five points.

Steph Klovekorn and Camry Lane had four points each for Sayre and Emily Moore had two points.

For Towanda, Ali Daum scored four points, Kinslee Kriner had three and Shay Chandler and Sydney Schoonover each had two.

TOWANDA -- Waverly outscored Towanda 43-13 in the first half on their way to the win.

Jon Ward had 22 points for Waverly and Zach VanHouten and Hunter Bodine each had eight points.

Jason Jequinto and Gavin Judson had three points, Nate Bennett had two and Brandon Cantrell had one point.

Towanda got 13 points from Dalton Potter and Luke Tama and Dylan Hartman had four points each, while Troy Pierce and Tanner Kunkle had two points each.

Tama had six boards and Pierce and Potter had three boards each.

SAYRE - In a game that featured seven lead changes, Athens came out on top on Tuesday in the Valley Christmas Tournament.

Daniel Joyce had a double-double with 10 points and 14 boards, along with two blocks, and Aric Westbrook had eight points and eight boards.

Nate Sweet had seven points and four boards, with two steals and Isiah McClenny had six points and seven boards.