Wellsboro runs to 49-26 victory over Hughesville. 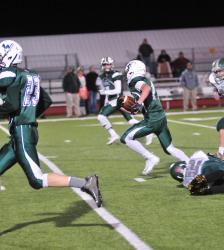 Quinn Henry ran for three touchdowns and passed for two more en route to Wellsboro's 49-26 win over Hughesville on Friday night in the first round of District IV AA playoffs. With this win, Wellsboro advanced to the AA semi-finals where they will take on South Williamsport next Friday at Mansfield University.

Hughesville jumped out to an early 6-0 lead after Gavin Steele ran in a 4-yard score with 7:33 left to play in the first quarter. Wellsboro then took a 7-6 lead with 1:54 left in the first quarter when Quinn Henry connected with Parker Jones for a 24-yard score. Jones would finish the night with three catches for 54 yards and seven tackles and one sack on defense.

In the second quarter, Wellsboro's Dupree Hosey broke loose on a 48-yard run to put Wellsboro up 14-6. Just before the end of the half, with 35 seconds left on the clock, Hughesville's Ryan McClain caught a 4-yard pass from Landon Henry to make the score 14-12. When Wellsboro got the ball back, everyone was expecting them to pass to score before the end of the half. But Quinn Henry and the Wellsboro coaching staff had a different idea.

"It was probably not your most conventional call but Quinn (Henry) is not your most conventional quarterback," Wellsboro coach Matt Hildebrand said. "When you're running the ball with 18 seconds to go in the half, most teams are going to try to throw the ball but they sent deep in a cover four so we thought 'let's give Quinn the ball' and when there's not that many guys in the box there's a good shot he'll get in the end zone. So that's what he did." Henry ran for a 55-yard touchdown to put Wellsboro up 21-12 at the half.

In the second half, Henry and the Wellsboro offense struck first. This time, Henry passed to Brandon Lamphier for a 34-yard score to put Wellsboro up 28-12. Lamphier finished the night with two catches for 66 yards.

After a Hughesville touchdown off of a Landon Henry pass to Jase Wright and two-point conversion the score was 28-20. Wellsboro would score two more times before the third quarter finished — once off of a 13-yard Quinn Henry scamper and once off of a 60-yard Dupree Hosey run. Hosey set a career high for rushing yards with 14 carries for 170 yards, one catch for six yards and two rushing touchdowns.

Hughesville scored for the last time with 11:29 left in the fourth quarter off of a Brenden Gardner 6-yard catch from Landon Henry. The Wellsboro defense proved frustrating for Hughesville's offense the whole night.

"They found a few chinks in our armor throwing to the flat tonight but we eliminated the big plays for the most part," Wellsboro coach Matt Hildebrand said. "They have a great receiver in No. 16 (Brenden Gardner) and Landon Henry, he is one of the best QBs we've seen this year. Moving ahead we have to continue to contain the QB. Our defense, even though they were scored upon, they did what they had to do to keep them out of the end zone and it was definitely a team win."

The Wellsboro offense then answered with their own fourth quarter touchdown with 8:14 left in the game when Quinn Henry ran the ball in for a 1-yard score, bringing the game to its final score, 49-26. Henry finished his night 8-11 passing for 131 yards and two passing touchdowns, 13 carries for 121 yards and three rushing touchdowns and eight tackles and one interception on defense.

“It was definitely a different kind of win than we're used to having this year but but I'm really proud of our boys and the character that they showed," Hildebrand said after the game. "This is a different situation than any game this year and you never know how they're going to respond to that. We were down for the first time all year and we came back and responded in a big way; they kept the hammer down and kept fighting all night. Once you get to the playoff the whole nature of the beast changes so I'm really proud of the way they fought tonight."

Wellsboro will take on South Williamsport in the next round of the District IV AA playoffs. "We're excited to see some film on South this week and get back to work," Hildebrand said on next week's matchup. "They got us here a few years ago and we're looking to get one back from them this year. They're a good football team and they've played some tough opponents so we're going to have to come and play a good physical football game."