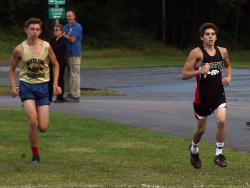 WYALUSING — For the first time in the Lasagna Invitational history both Wyalusing teams came away with titles.

Both teams came from behind to win the second consecutive relay.

The Rams led early but Towanda took over the lead for the middle legs. Then on the final leg Heeman came from third to outkick Mosier for the win.

On the girls' side Wyalusing's team of Catherine Brown, Ashlee Beebe, Carina Beebe and Hannah Corson won in 26:38.

The Tigers led throughout but Corson went from second to first in the final leg.